Jerry Springer and the Kildare accent

Opinion: Ramblings of a bogger 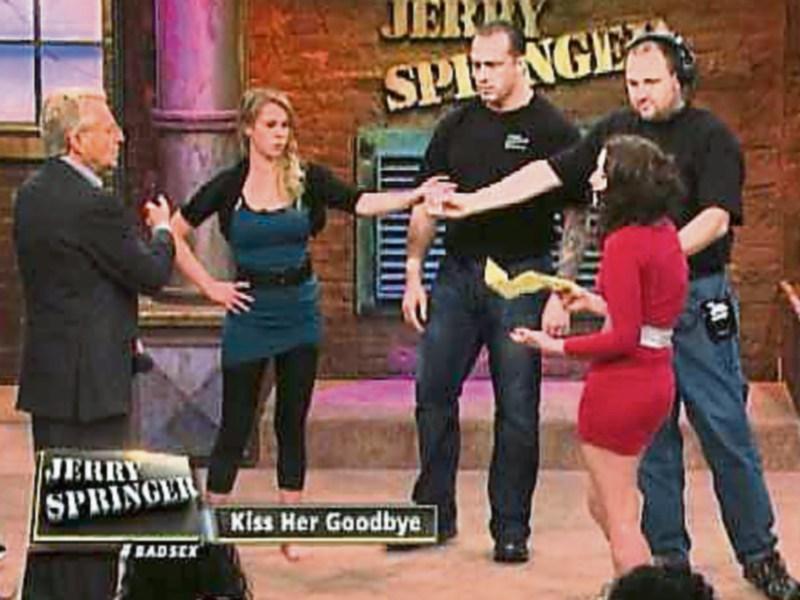 One of the many arguments on the Jerry Springer show

Chants of “Jerry, Jerry” rang out as the burly stage hand, Steve Wilkos, sprang on set to wrestle a very agitated girl away from her good for nothing partner.

A few slaps were aimed in his direction, as he peeled her off the much maligned man. Jerry stood to the side, microphone in hand, smiling, lapping up the energy and applause. It was surreal. Sitting there, watching the participants giving out about their lazy partners sitting around all day doing nothing.

The audience had their say too interjecting, shouting and roaring with the customary Jerry Springer rants.

We thought, why not get involved, get in the spirit of things. One of my Irish companions shouted into the microphone, “Get a job ya bum”, just to play our part in the grim, but riveting TV panto. The flat Kildare accent sounded so out of place, not that any of the audience noticed.

They were too worked up into a frenzy. Sucked into the drama at the TV studio in Chicago in the Summer of 99, you couldn’t be further away from the bog, the Curragh and the flat country Kildare landscape.

It’s in moments like this where you get a sense of your identity, a flash of reality, “am I really here?”.

I first noticed I had a country accent when I returned home from the Gaeltacht in secondary school. After speaking Irish for three weeks, I was astonished to hear the raw, flat tones reverberating everywhere on my return.

Everyone knows some Kildare people have problems with the whole “th” pronunciation. “The” becomes “de” and words can be pronounced broadly. It’s a subconscious thing. Other counties have quite neutral accents, but I think Kildare speak is quite distinct.

At least it’s easy for locals to pick out another Lily white by their accent. Well- known county people, who have a definitive Kildare accent include Charlie McCreevy, Christy Moore, Ray DArcy and Ruby Walsh. Often slagged in college over my accent, it didn't bother me. It was only a bit of messing and others were singled out too.

Several years after my visit to Chicago, Australia beckoned. We stayed with two Kildare girls who had left for Oz over a decade previously. Their accents were still as Irish as the day they left despite being surrounded by the Aussie twang. Others absorb accents as easy as a sponge soaks up water.

One acquaintance went to Galway for a weekend and came back saying “ara” this and “ara” that. She didn’t even realise her whole pronunciation had changed. It was totally subconscious, but quite funny.

The Donegal accent is continuously voted the sexiest accent in the country. Kildare rarely features in the top ranks.

As accents become more neutralised, will local phrases die along with the distinctive tones? With so many cartoons and shows featuring American and UK accents, are kids mimicking what they hear? Will the familiar broad dialect be lost? Is the bogger accent in danger of being neutralised?