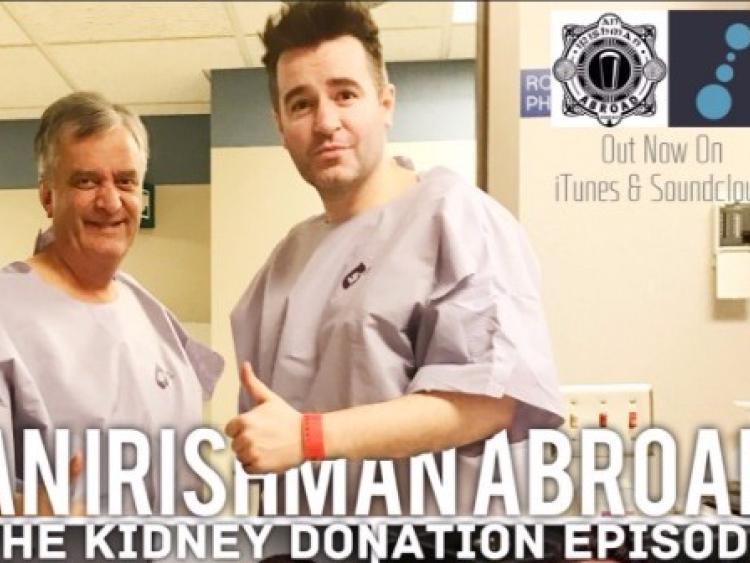 Jarlath promotes awareness of organ donation on his podcast. Pictured with is brother before the operation

A Kildare comedian is due to appear on RTE tonight to discuss how organ donation can save lives, after he donated a kidney to his brother.

Jarlath Regan, who hails from Newbridge, hosts the An Irishman Abroad podcast on ITunes. He has come to national and international attention over the past few years as a successful comedian.

The operation took place in the US over a week ago and both brothers are recovering well. Jarlath flew home on February 8 and has been raising awareness of the importance of organ donation throughout the process. He will be speaking to Claire Byrne on RTE tonight about his experience.

Speaking to Eoghan McDermott on 2FM in August, Jarlath said he didn't hesitate when asked if he would be willing to donate a kidney to his brother.

“Of course I’m going to save my brother’s life,” he said. Let’s be honest, too – it’s the ultimate good guy thing to do. From this point on, nobody can call me selfish. I have medical evidence that I am a decent human being.”

“I have two sisters…I have a kid and a wife. I have to support them. Families fall out over organ donation all the time. But the mad thing is there are people walking around with two kidneys when you only need one.”

Without the operation, he said his brother would probably have died within five years.

Tweeting after the operation, Jarlath said; "Thanks for all the messages guys. We're both over the moon with the results. So far so good."