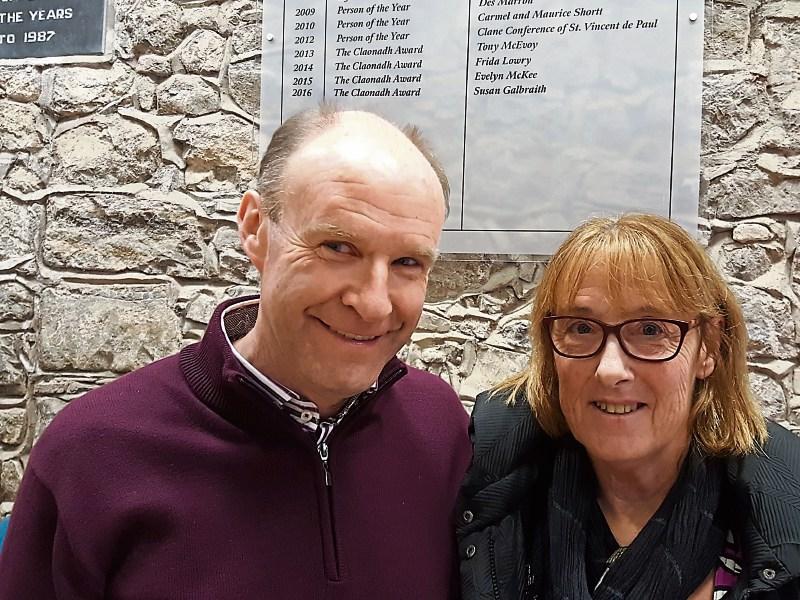 SUSAN Galbraith was delighted to receive a special community volunteering award in Clane on December 4.

The Community Council decided that her volunteering work in the area was worthy of her receiving the Claonadh award for 1916.

On Sunday night, December 4, just before the turning of Clane’s Christmas tree she had to take to the stage to receive her award, complete with a two minute warning that she had to say a few words.

Her son Dean, who is now working as a project manager in London, was present and he videoed the action so that his sister, Kim, Susan’s daughter in Sydney, Australia, could get a taste of the event.

Susan is no relation of the famous economist, John Galbraith.

She turned fifty last August and has spent half of her life - just over twenty five years - involved with the organisation of swimming with Clane Community Games.

Many in Naas will have known her as a swimming teacher at the old Naas pool, where she taught for thirty two years.

A native of Kilmurray, Clane, she trained as a special needs assistant after caring for her mother at home for three years.

She took up work as a special needs assistant at Hewetson school in Clane. “I love teaching and I love working with children,” she said.

It has been an eventful year for her.

Her mother, Phyllis Reid, who who taught music at Hewetson, passed away last February. In May, Susan, herself, had a hip replacement.

Apart from swimming, she volunteered for fifteen years with the 5th Kildare scout unit, including with Henry Lowry, whom she acknowledged her in her brief speech on December 5.

Her mother was a founder member of the cubs section of the unit.

She has also been a Sunday

Susan separated from her first husband when her children, now in their early 30’s, were around nine.

Last year she married Chris Walshe who was also present on December 4.

She thanked him for helping her for the past few years and also, Kim and Dean.

“Thank you very much. This is going to look fabulous..a pride and joy in my house,” she said of the award.