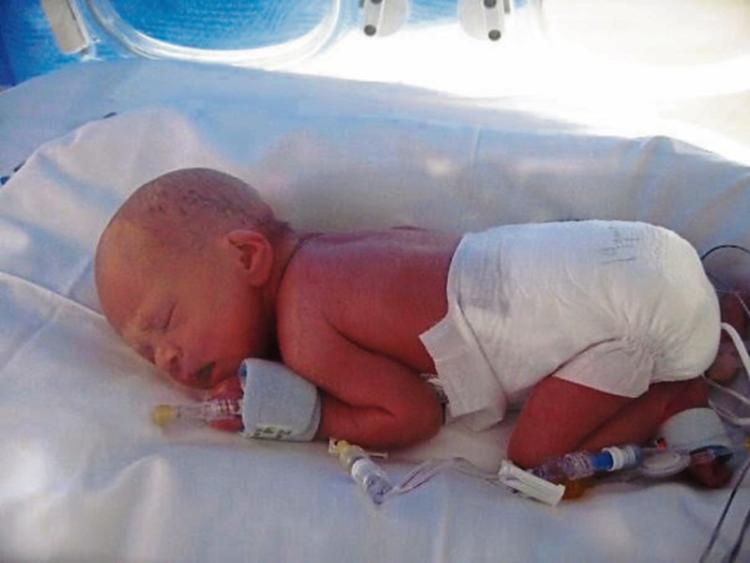 Denise Carroll and her husband Gary Collins’ first born Grace was born  prematurely at 29 weeks in 2008.

The couple from Celbridge were told at their 14 week scan that it was not a viable pregnancy.

“We were not expected to hold on to her due to some unexplained bleeding,” said Denise.

“It was not a viable pregnancy so they don’t give you any treatment until you get to 24 weeks. Then they took me into hospital and gave me steroids for the baby to develop her lungs and they looked after me and thankfully she managed to hold on to 29 weeks.”

Denise went into labour in Holles St Hospital where she had been kept since her 24-week scan.

“She was born very quickly and my husband made it just in time. The team was fantastic and straightaway the room filled with people.

“They very quickly explained to me the kind of treatments she would need and she was then taken to the baby unit.

“She is a miracle baby because of the steroids and the care she was born at 3 pounds and 16 ounces. That is a good size for a premature baby.”

Baby Grace was kept mostly in an incubator where she had to grow more and learn in time to feed.

“Lots of bits had yet to grow so in fact when she was first born we were not sure if she was a boy or a girl,” explained Denise.

“Things like her ear lobes had yet to grow and her nipples. She was covered in hair to keep her warm and her skin was raw. She was bright red. And she couldn’t suck so she had to be fed by a tube in her nose. She had to learn to feed but at first learning to feed used up a lot of her calories and she needed her calories to grow. So it is all a balance in the beginning.”

The incubator replicates the womb and is crucial for the survival of a premature baby outside the womb.

“In the incubator they build these little nests to emulate the womb. So that their legs are all curled up like hey would be in the womb.”

Denise who went on to have two more babies to term said that she was thankful that Grace was her first born as she was able to dedicate all her time to her.

“I was with her and at the time I didn’t have any more children at home. I could dedicate my whole self to her and I was able to read everything about it.

“I spent a lot of time there holding her and feeding her. In total it was six weeks before we could bring her home. When she reached five pounds we took her home.

“I got a shock when I came home and realised just how small she was because in there she was one of the bigger babies.

“She wore dolls clothes in the beginning because they fitted her. It was winter time so we mainly kept her inside and warm.”

“She is unbelievable,” added Denise.

“She hasn’t had any problems. She is a little anxious and a little attached , which is understandable but she is perfect health wise. She is in second class now so she will be making her communion next year.”

Grace now has two siblings, a five-year-old sister Juliet and a three-year-old brother Charles. Her dad Gary is a child psychologist who works in the Newbridge Health Centre and he has done some work with premature children.

“In terms of advice to give to other parents going through it I would say listen to the people around you. We got some great advice. We had good support so I would also say involve your family. Our whole family raised Grace and I had tons of people to lean on so we were very lucky. We are especially lucky to have Grace.”

This month is Premature Babies awareness month and to offer your support you can text unit8 to 50300 to donate €4 to NMH foundation.