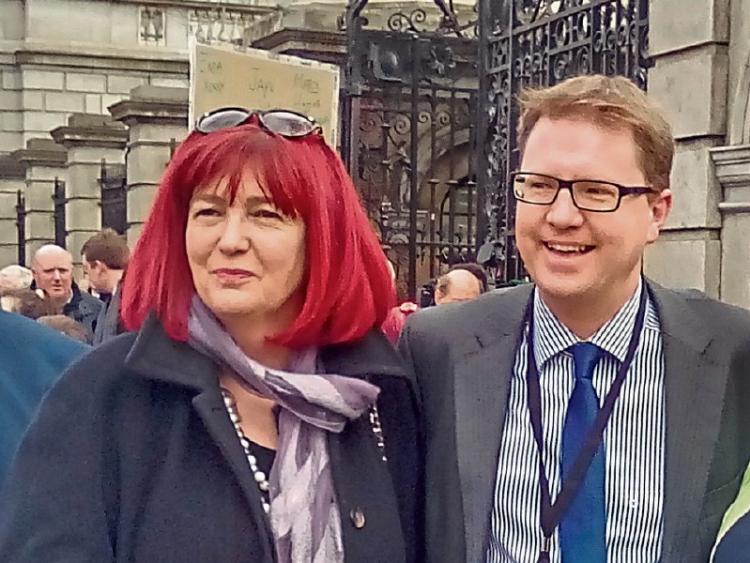 Carmel Kelly, left, pictured with Deputy James Lawless outside Leinster House on the first day of the Dáil. She is expected to take his Kildare County Council seat

It is expected they will become councillors at a special meeting of Kildare County Council at 2pm this Monday, March 14.

Due to agreed protocol at Kildare County Council, it is being left to the Fianna Fáil party to select the three new councillors to replace the former councillors who were elected as TDs last month – James Lawless, Frank O’Rourke and Fiona O’Loughlin.

The party has been voting through its cumainn this week.

The Leader understands that well-known party activist, Carmel Kelly, from Sallins will be nominated by the party on Monday to replace Deputy Lawless in the Naas Municipal District.

One other candidate was thought to be interested but withdrew, leaving the field open to Ms Kelly.

In the Kildare-Newbridge Municipal District, it is understand there are possibly four candidates up to replace Deputy Fiona O’Loughlin. Among those are her close supporter, Rathangan-based Ann Connolly; former Newbridge Town Councillor, Murty Aspell and Noel Heavey from Clongorey.

In the north of the county, Michael Coleman, a supporter of Deputy Frank O’Rourke, is the sole candidate to take his seat in the Celbridge-Leixlip Municipal District.

It was thought that Leixlip-based solicitor, Grainne Whelan would put her name forward. Other than Deputy O’Rourke, she was the only candidate to run for Fianna Fail in the District in the 2014 local elections.

Ms Whelan was nominated by the Leixlip cumann but withdrew on Thursday.

She told the Leader Friday morning she was honoured to be nominated and thanked the cumann, but the time was not right for her.