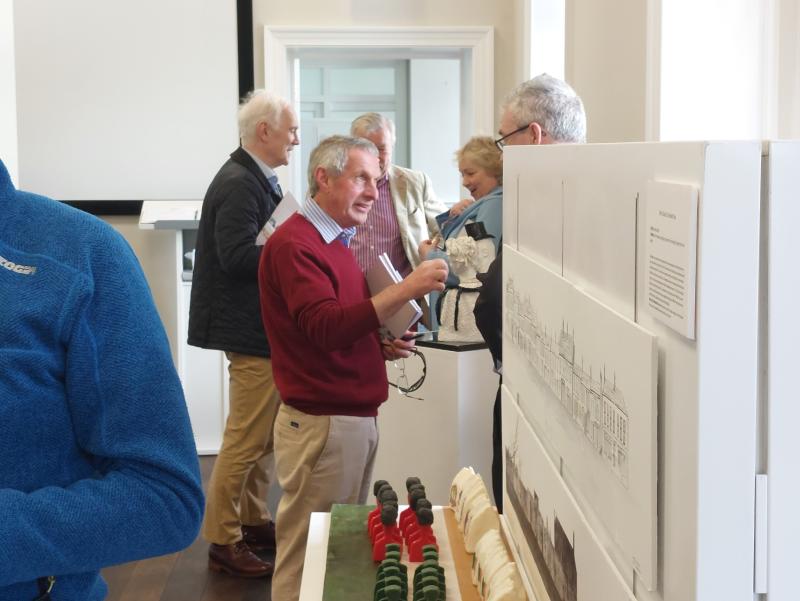 The historic moment where the British handed over the ‘fine grounds of Newbridge Barracks’ back to the Irish people 100 years was commemorated on Monday, May 16.

A multi-media exhibition called Life Goes On, organised by local group SULT artists, was formally opened at the Bord na Móna headquarters, which now occupies the barracks site, to mark the centenary.

Mr Andrews is the grandson of Irish political activist Todd Andrews, who famously escaped from the military camp in Newbridge after being interned there, and later went on to become the first ever chief executive of Bord na Móna in 1946.

During his speech, Mr Donnellan said: "We are here to honour people who provided their services to Ireland, like Todd Andrews, who escaped internment."

He described the late Todd Andrews as a man who ‘hoped that the 21st century would be bright, forward-looking and more progressive’. 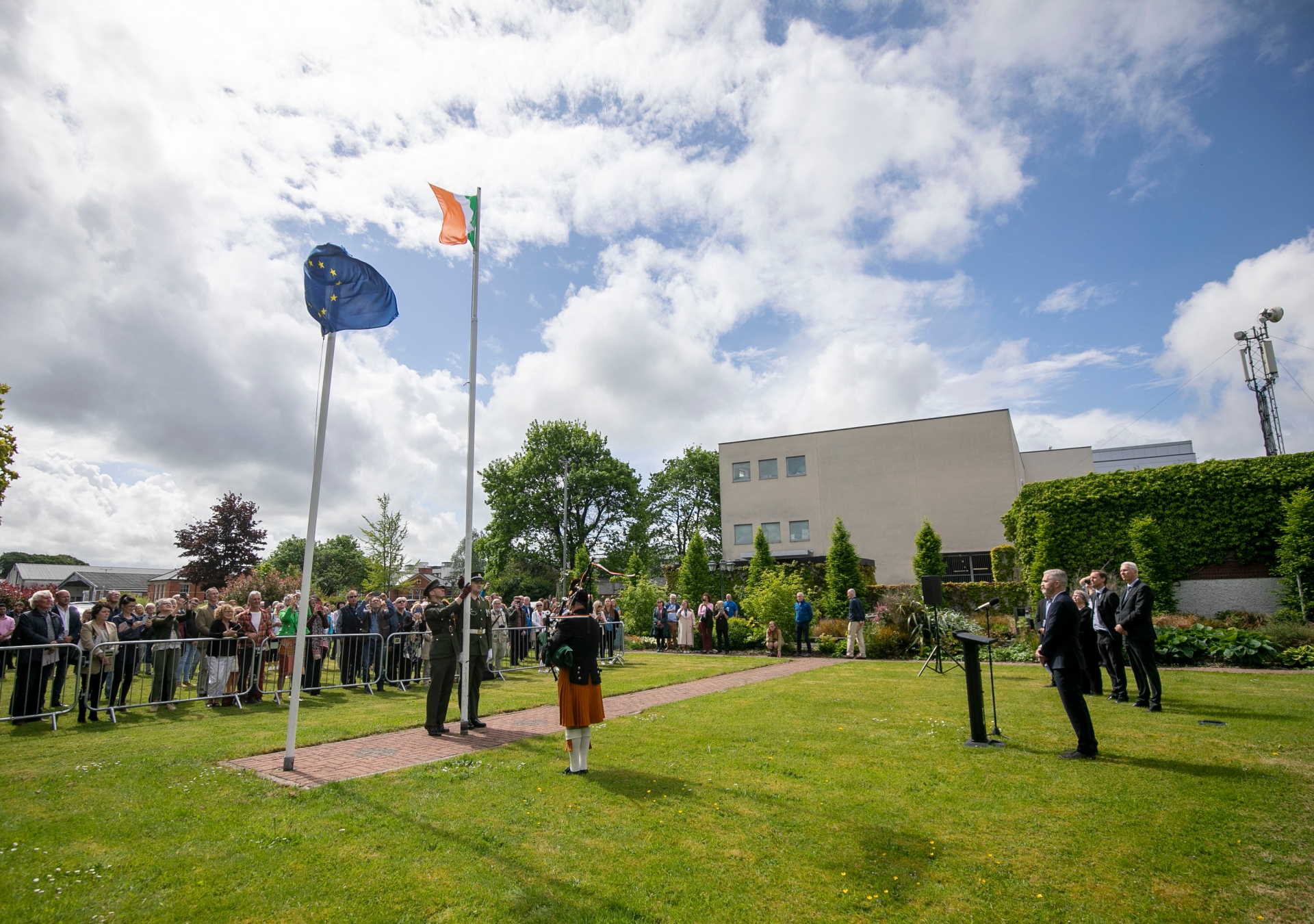 The raising of the flag. Pic by Fennell Photography

Ms McGrath then talked about the trauma the post-Civil War faced, how they desperately wanted to move on with their lives, and how this in turn informed the artists at SULT while organising their exhibition.

Mr Durney gave a brief historical account of the handover which occurred 100 years ago, and noted that the Leinster Leader at the time described the area as the ‘fine grounds of Newbridge Barracks’. He formally declared the exhibition open.

Reflecting on his grandfather, Mr Andrews said that although he only knew him for a short while, with Todd having passed away when he was 18, he remembered him as a funny and patriotic man, and said that his grandfather ‘likely inspired’ him to pursue a career as a history teacher.

He added that while his grandfather was met with ‘considerable resistance’ when he first became chief executive of Bord na Móna, but was determined to lead Bord na Móna to success. 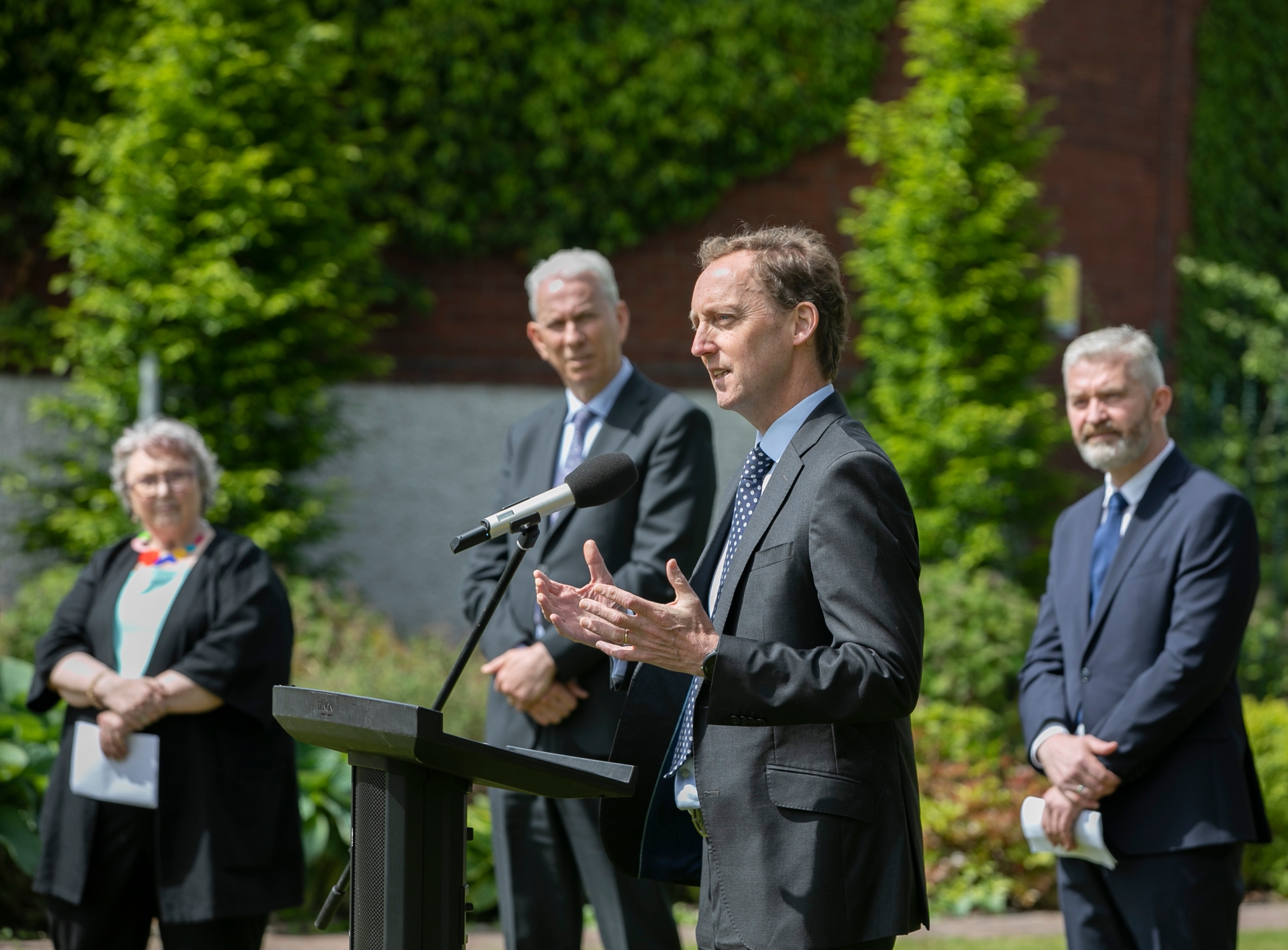 Mr Andrews also pointed to a line in a book written by his grandfather, which detailed his great appreciation for the ‘subtle smell of the mosses and wildflowers, but above all else, the impenetrable silence’ associated with bogs.

After the series of speeches, attendees were finally allowed to enter into the exhibition in the Andrews Room, which was adorned with a plethora of colourful and finely crafted pieces of art provided by artists Mary McGrath, Brian O’ Loughlin, Ann McKenna, Pamela de Brí, Liza Kavanagh, Lia Lambock, Sylvia Hemingway, Margaret Becker and Eleanor Swan.

Ms de Brí told the Leader that the artists were inspired to bring their ideas for the exhibition to Bord na Móna, after being made aware of the 100 year anniversary event by Newbridge History Group.

One of the artists, Ms Laimbock, explained that her painting, Meeting at the Barracks Gate 1922, was an homage to the famous Meeting on the Turret Stairs painting by Frederic William Burton. 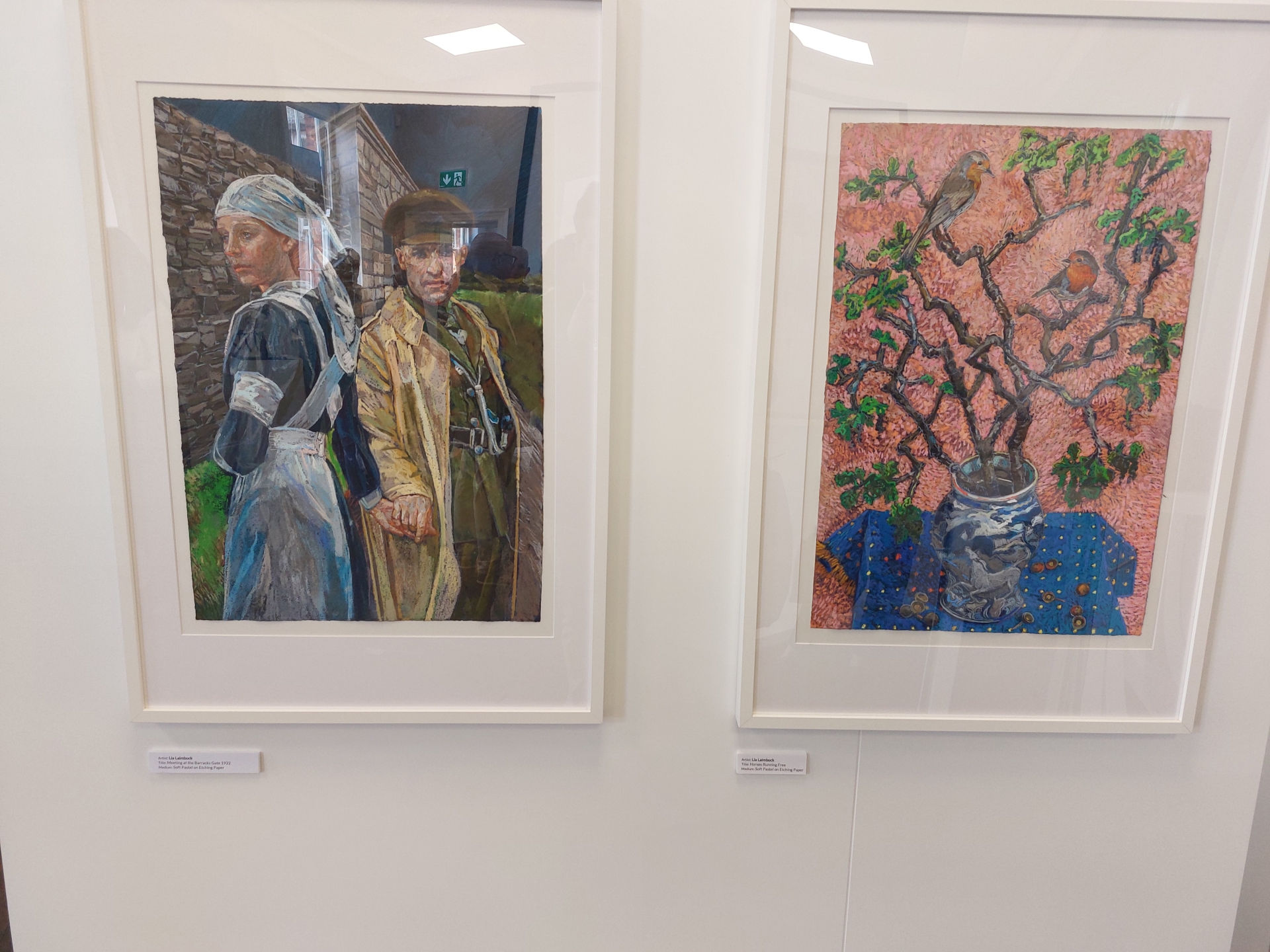 Two of Ms Laimbock's paintings. The one on left is Meeting at the Barracks Gate 1922

She described it as showing an English officer engaged in a ‘forbidden’ love affair with a local nurse.

Ms Laimbock, who is originally from the Netherlands but now resides in Newbridge, also paralleled this with Dutch women who fell in love with German officers in the Second World War.

“People have responded really positively to it, I think because of its depiction of the human connection,” she explained.

Lucina Russell, arts officer at Kildare County Council, said that she was ‘touched by the large turnout’. 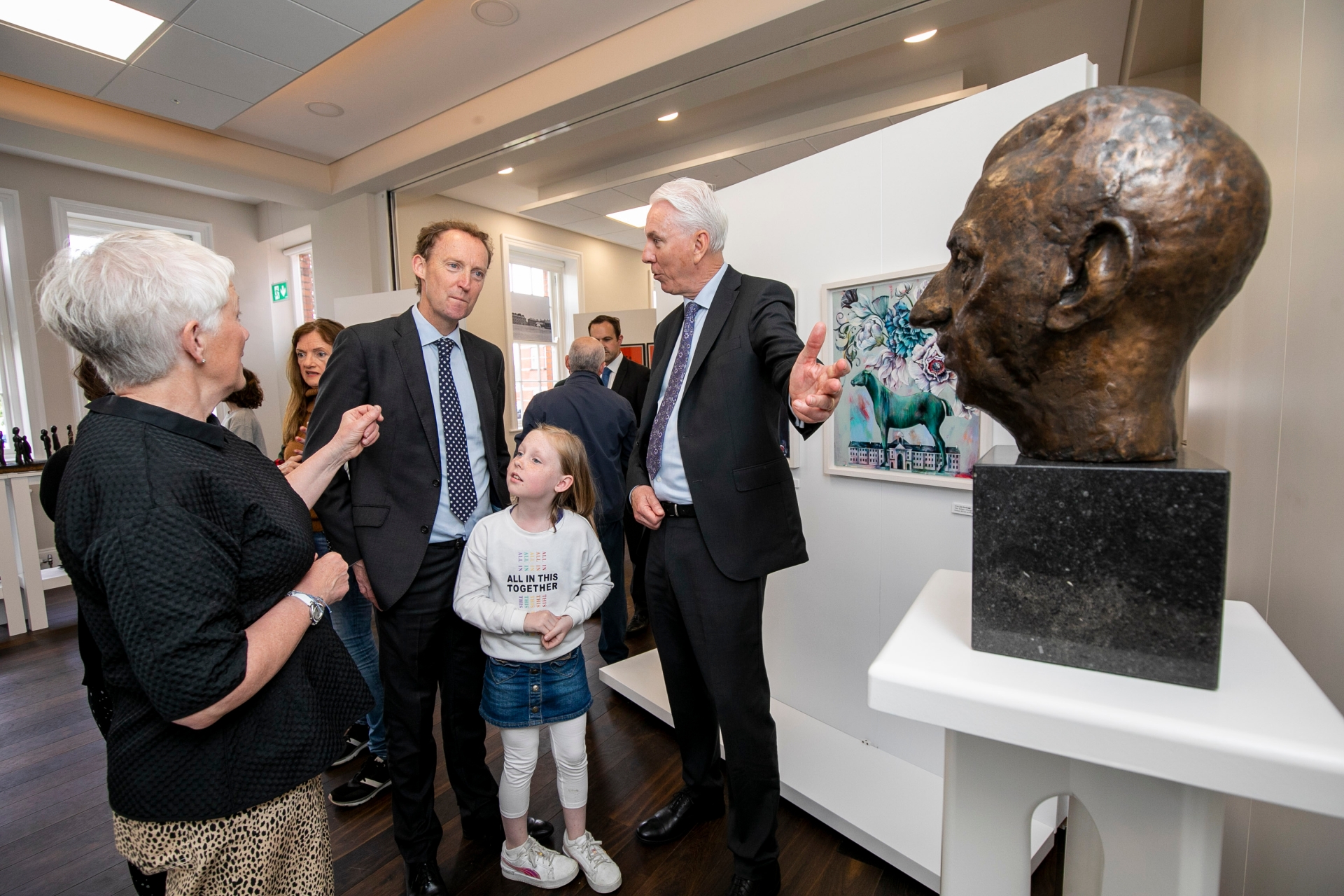 She said that she hopes that it will inspire more artistic collaborations: "I am looking forward to where it leads to next," she added.

Sinn Féin TD Patricia Ryan was also in attendance along with her colleague councillor Noel Connolly.

Ms Ryan said that it was a great honour to be at the event, and referred to the works on display as ‘beautiful.’ 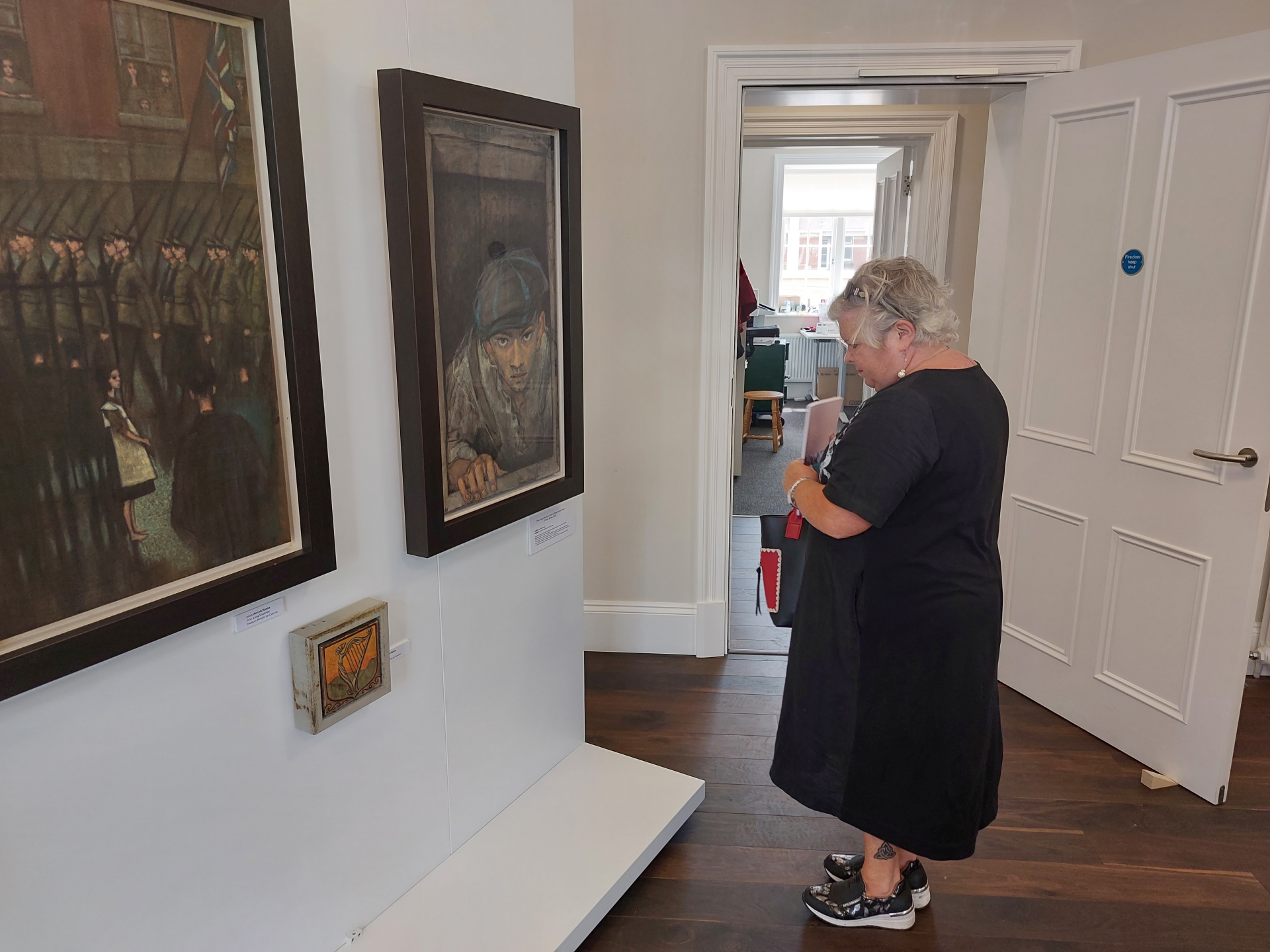 Patricia Ryan TD admiring one of the paintings in the exhibition

The exhibition is now open to the public until May 29, 10am to 4pm daily.