Lions to screen 10,000 people for diabetes at the National Ploughing Championships 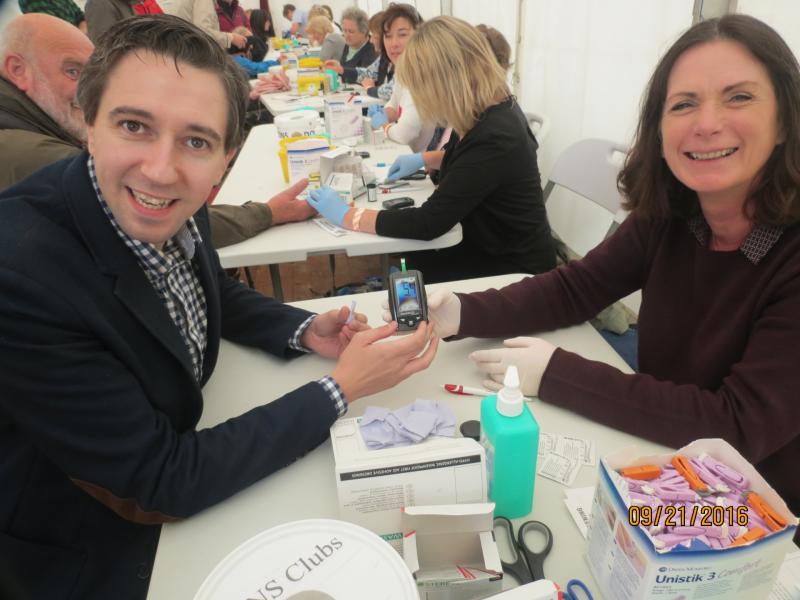 In response to the growing incidence of diabetes in Ireland, and the detection of potential diabetes in more than 600 visitors to the National Ploughing Championship last year, Lions Clubs plan to screen a record 10,000 people at the 2017 event in Screggan, Tullamore.

This years’s event will also be a project associated with the Centenary of the establishment of Lions Clubs International in 1917.

A team of 120 Lions and qualified nurses will be at the Lions Marquee at the Championships (Row 25, Stand 594) from September 19 to 21.  They will offer visitors a free simple, painless blood test which is designed to identify early symptoms of diabetes. The service will run from 8am to 6pm on each day of the Ploughing Championships and the Lions are confident that they will significantly exceed the 8,000 visitors who availed of the test last year.

Last year 8.3% of those screened, mainly farmers, were identified as potentially diabetic and were referred to their GPs for further examination.

According to Teresa Dineen, District Governor of Lions in Ireland, the incidence of diabetes is accelerating rapidly in rural Ireland due to diet and lifestyle changes and many people who are vulnerable to the disease remain oblivious of the risk that they are running.

"Medical experts estimate that up to 200,000 people with diabetes in Ireland are unaware of their condition. It is estimated that there are 200,000 people with diabetes and a similar number who have diabetes but are unaware that they have the condition. The majority of these people will only be diagnosed through an acute medical event because they do not have a regular blood test. A further 250,000 people have impaired glucose tolerance or 'pre-diabetes' of which 50% will develop diabetes in the next five years if lifestyle changes are not made."

Traditionally, farming was one of the most active occupations. However, according to the National Centre For Men’s Health at the Institute of Technology, Carlow,  the evolution of tractors, combine harvesters, milking machines, ATV’s and jeeps has replaced a great deal of the labouring and physical aspects of farming. As a result, while farmers are still busy, they are not as physically active as they used to be.  In a booklet, ‘Staying fit for Farming’, the Centre says that regular physical activity or exercise has been shown to have a hugely positive influence on both physical and mental health. It reduces the risk of heart disease, diabetes and a number of cancers as well as being a very good way to manage stress and to control weight. However many farmers are not doing enough physical activity to have good health.

According to the Centre, farmers spend more time sitting while machinery ‘does the work’, some farmers stop taking part in sport when they feel that they can no longer do it competitively, many farmers struggle to find time for themselves when balancing their work and family life and some farmers simply get out of the habit of exercising and are not sure how to start back or what kind of exercise to do.

The 2,500 Lions in Clubs throughout Ireland, work to raise awareness of diabetes and organise frequent screening days all over the country. They have been offering this service at the National and World Ploughing Championships for many years and an indication of its effectiveness is that more than 600 participants in the 2016 test were referred to their GP for further examination. This represents 8.3% of those tested.

Lions also liaise with the Diabetes Society of Ireland and will be distributing its information literature at the National Ploughing Championships.