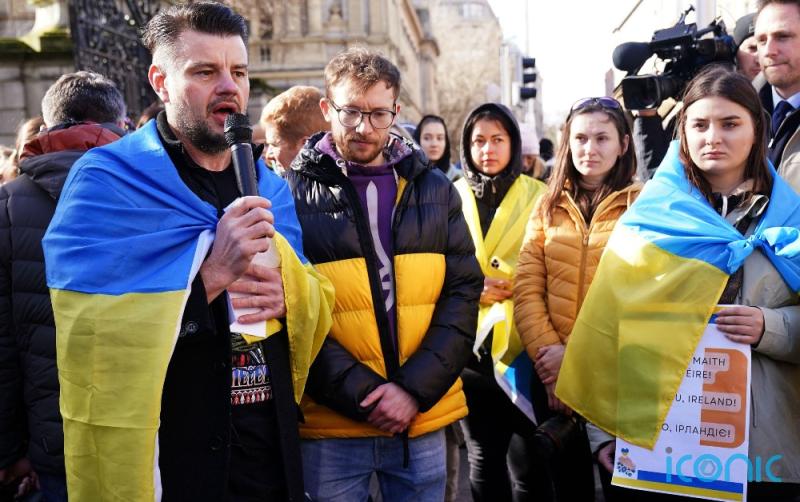 Protesters in Dublin have called on the Irish Government to ban symbols of support for the Russian invasion of Ukraine.

Around 100 people, waving Ukrainian flags, urged the Government to ban what they dubbed “Russian hate symbols”.

The protesters gathered on Kildare Street, outside the Irish parliament, on Thursday afternoon.

“No Z in Ireland,” they chorused, with many waving the blue and yellow flag of Ukraine.

The Z symbol has become associated with Russian support for the war in Ukraine, which has led to the deaths of thousands of soldiers and civilians, as well as the bombing of towns and cities across the country.

Earlier this week, the Ukrainian Ambassador Larysa Gerasko said rallies in support of Russia, as well as what she called the “Z swastika”, should be prohibited.

Nick Kozlov, from the Ukrainian Crisis Centre in Ireland, spoke at the rally.

“Just imagine this – all twice the size of Ireland being displaced. Our children being killed. Our women being raped.

“Our children being raped in front of their mothers and all that being done under the letter Z. So please, Irish Government, hear us,” he said.

“We have seen on the streets of Dublin in Ireland, a democratic state, signs that are killing our women, children and civilian population with no reason, no purpose and no cause.

The protest coincided with a visit to Kyiv by Irish Foreign Minister Simon Coveney, where he said that the killing of Ukrainian civilians by Russian forces is likely to be a war crime.

He was visiting areas in the Ukrainian capital directly affected by the Russian invasion, and meeting Ukraine’s foreign minister Dmytro Kuleba and defence minister Oleksii Reznikov.