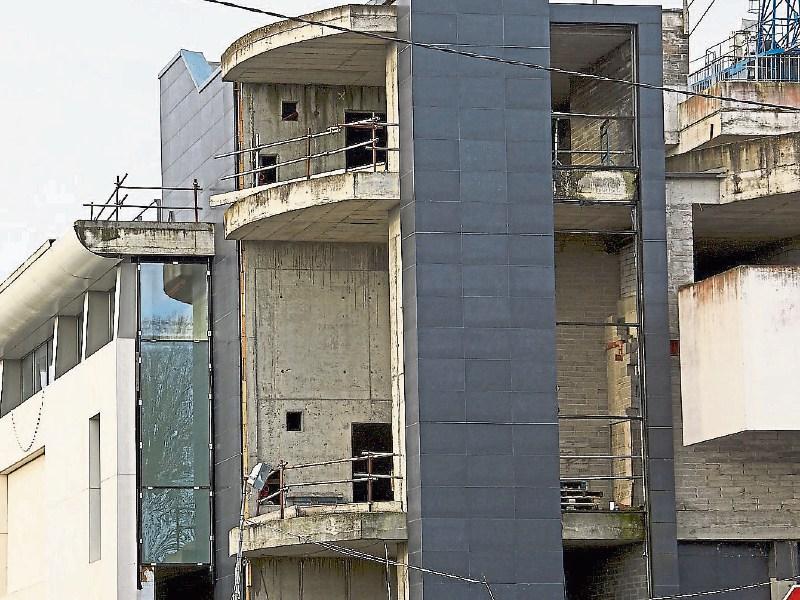 A view of Naas Shopping Centre

There’s a scene in the 2007 award winning film No Country for Old Men which has two police officers surveying a multiple murder scene.

One turns to the other and says “It’s a mess, ain’t it Sheriff.”

He replies “If it ain’t, it’ll do till the mess gets here.”

It’s twenty two years since Kildare County Council sold a town centre park to make way for the shopping centre and 13 years since the completed building was due to open to the public.

There is no indication when it will open or what form it will take - in other words whether it will be a retail centre, like Whitewater shopping centre in Newbridge, in the middle of a town where the population is exploding.

The alternative scenario may be a so-called mixed development in this case with residential accommodation in the form of apartments and some medical enterprises, including a drive-thru pharmacy.

The latter was a proposal put forward by Ger Roche of the Roche Group, the current owners of the site and the Vista Centre on Ballymore Road.

This was the tentative proposal put forward by Mr Roche after buying the premises.

It’s not known how much was paid for the derelict building.

It went for sale on the insurrection of NAMA with a guide price of €4.6m - a fraction of the estimated construction cost of €40m.

That’s a loss for the taxpayer and ratepayer to pay, along with the associated administrative and security costs. Not to mention the loss to Kildare County Council resulting from losing the  car park and development levies - though it did get some houses at the back of the centre.

It’s likely that it was sold for less than the guide price because NAMA were surely keen to see it offloaded and, apparently, there were few if any other genuinely interested parties.

Since then there have been moves towards reopening the two now closed pubs on the main street - the Five Lamps and the Forge Inn - but as yet they remain stalled.

The mooted pub openings coupled with the failed bid by the Roche Group to create a new entrance from the main street suggest that the plan may be to redevelop the site in stages - rather than a comprehensive  plan covering the entire premises.

As reported in the Leinster Leader, Mr Roche was none too pleased when his plan was turned down - principally because Kildare County Council is legally bound to protect old structures with a heritage value and the Bank of Ireland premises is one of these.

This decision has been appealed to An Bord Pleanála with a decision due by October 24.

In the meantime another potential difficulty has arisen.

Replying to a question by Cllr Colm Kenny, KCC said that road improvement works at the back of the centre (near Naas CBS) will have to be built by the developer.

If this is to proceed as per the original permission granted to the original developer, Marshalsea, it will come at some cost.

It involved a new entrance at the Sarah Flood pub site down Corban’s Lane to where the route meets the NSC back entrance. Further on, it is also envisaged work there will be work  on Friary Road and a possible removal of the old railway bridge, which is the highest point on that road. All of this will need to be done to facilitate  traffic visiting and leaving the centre as well as taking into  account the needs of Naas CBS and the boys primary school.

The schools have a combined enrolment of getting on for 1,600 boys - and the primary school is itself to be knocked and rebuilt as a two storey school with 16 classrooms.

There’s but one certainty here.