"A bizarre decision, which came out of the blue" 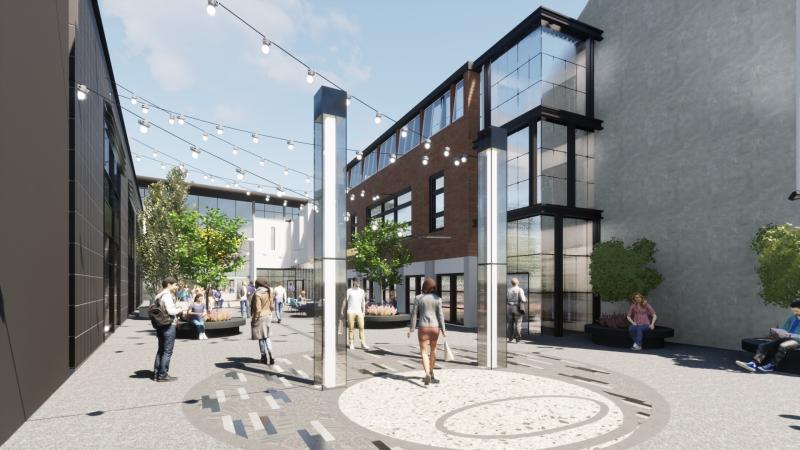 A planning application to demolish part of a building as a prelude to finally opening the Naas Shopping Centre has been rejected, prompting anger from the NSC owner.

Permission was sought from Kildare County Council to demolish the remaining structure which formed part of the Bank of Ireland building at South Main Street, as well as a building adjoining the bank.

These would be replaced with lighting stands and steel gates.

The application also sought the go ahead for a new internal layout for the Forge Inn pub over four floors as well as a glazed three storey extension, along with a landscape plaza and a seating terrace for the Forge Inn.

The application was made by Central Tower Ltd., which is connected with the Roche Group, the new owners of the shopping centre.

This work was to have taken place at the entrance to the shopping centre as per the original plans for the development.

The Roche Group bought the 44 unit centre over two years ago after it was put up for sale on behalf of the National Asset Management Agency (NAMA). It had a price tag of €4.6m when it went on the market.

KCC has not yet given reasons for the decision to decline permission.

Ger Roche of the Roche Group said: “We’re shocked and extremely disappointed in this unbelievable decision. This is not my fault that this happened and the plans that were submitted were based on an idea expressed by the planners which we took on board and reflected in our planning application as accurately as possible. We’ve had significant potential tenants at the table for consideration as anchor tenants but they’re reluctant to commit because they haven’t got certainty to what should be a very basic application and decision, this is just a completely bizarre decision out of the blue and greatly delays progress for the development and creates huge uncertainty.”

He added that if granted, the works would have seen the entrance to the shopping centre finally become a prominent visible feature at the end of a newly paved pedestrianised street.

The new entrance was planned for between the Bank of Ireland and the Forge Inn on the main street “and the vision was to have complemented the entire town centre.”

KCC has not yet given reasons for the decision to decline permission.

However, KCC’s heritage officer Bridget Loughlin said the removal of the building and the introduction of “such a modern intervention”  would have a significant impact on the streetscape and “will materially affect the character of the architectural conservation area (ACA).”

An ACA is a place of special architectural interest.

Ms Loughlin pointed out that the building is a protected structure and this is recognised in the council’s development plan.

Ms Loughlin recommended that the plan be refused.

Naas Green Party councillor Colm Kenny also made a submission and said that this application deviates from the previous planning permission (granted to the original developer) “to instead remove the ornate Italian Tuscan architectural front facade.”

He also said consideration must also be given to the block built BoI structure, which is also protected.