Over €2.5m spent street cleaning and emptying bins in Kildare this year 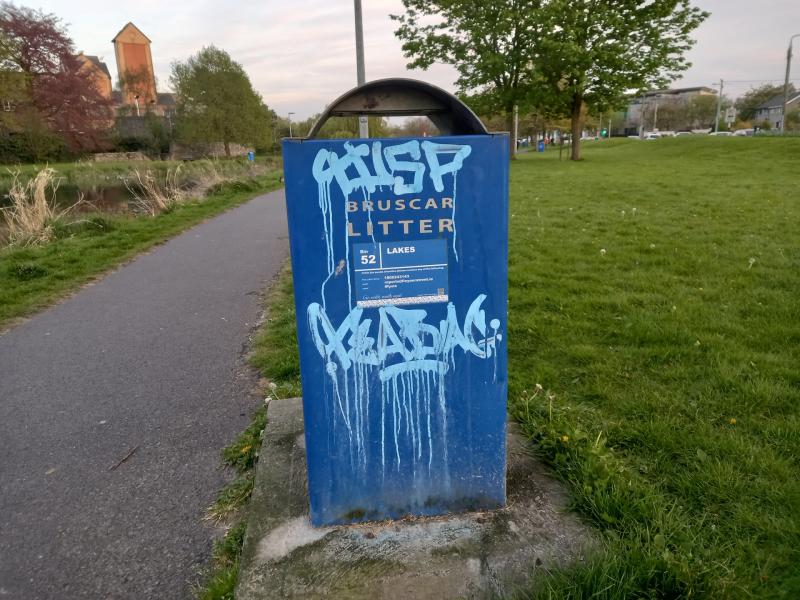 A litter bin located at the lakes area in Naas

Kildare County Council is spending in excess of €2.5m on litter management.

A KCC meeting was told that the council currently will spend €2.525m on street

Nevertheless, Cllr Kevin Duffy complained about inconsistencies in the service pointing to the fact that different sections within KCC are responsible for emptying litter bins.

He told a KCC meeting on April 25 different entities collect litter in playgrounds and  cemeteries and the emptying takes place at different frequencies.

“All the public sees is that some bins are full and some are empty and they don’t see that different sections (of KCC) are responsible for different bins, there needs to be rationalisation. Not every bin needs to be emptied every day,” he said.

He added it “cannot be efficient” to have bins collected in five or six different ways and “the inconsistencies have to be resolved.”

He was supported by Cllr Bill Clear who said this is a big issue.

He said that where bins are provided less litter accumulates and  there is litter in areas which are not serviced by bins.

“I know this from experience,” he said, adding that measures must be taken to stop the  household refuse being deposited in the bins and this can be achieved by making the holes smaller.

Cllr Suzanne Doyle pointed to discrepancies between different areas in the county and she suggested that the level of services should be delivered at a ratio of the local population.

“We will always have to provide this service at the same time as trying to reduce waste,” she said.

A call for more frequent collections was made by Cllr Michael Coleman and he wants Sunday collections to take place, saying this has had an effect when it has been tried.

And Cllr Carmel Kelly said there should be more street collections when there are more people around like at Easter and during summer.

Cathaoirleach Naoise Ó Cearúil said the collections should reflect how busy the the towns are.

KCC official Joe Boland said that the county is “going the right way” and pointed to Naas’ win and Leixlip’s fourth place in the most recent IBAL assessment.

He also said litter management is both labour intensive and very expensive but providing additional cover at weekends “might be the thing to do.”

He said  it has been very difficult to control expenditure in light of the myriad of demands and any requests for additional services would need to be carefully costed and considered “in the context of the annual budgetary process.”

In particular, any suggested “reviews” should not be interpreted as an opportunity for yet more bins and additional street sweeping.

Mr Boland noted that playgrounds are serviced separately by the Parks Department by contract following a tender.