It's claimed the firearm was bought for €500 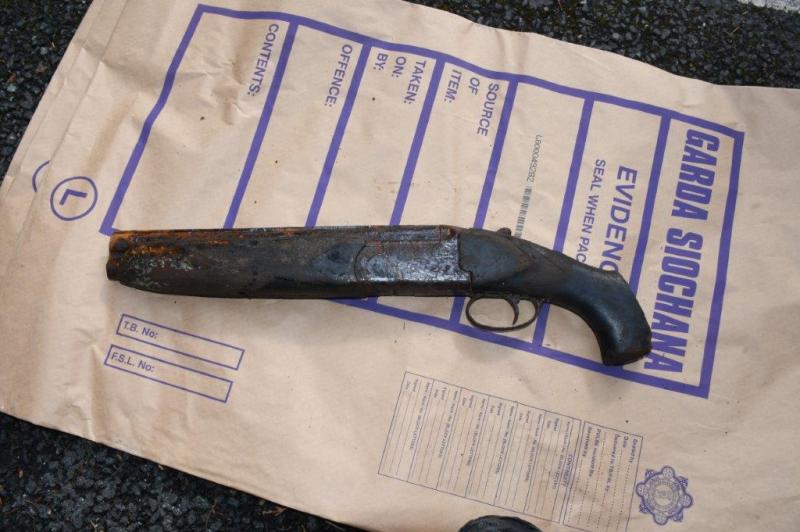 The firearm allegedly found in the vehicle near Kilcock

A 21-year-old man who was found with a sawn-off shotgun in his car after armed gardaí stopped the vehicle appeared in Naas District Court today, Tuesday, April 4.

Luke Menton, whose address was given as Ticknevin, Carbury, is being prosecuted for alleged possession of a 12 gauge double barrel shotgun at Cappagh, Kilcock, on April 2.

Garda Jason Tone told the court the defendant was originally arrested under Section 30 of the Offences Against the State Act at 12.45pm. The garda added that when charged  at 6.50pm on Saturday, the defendant made no response. Garda Tone added that the gardaí staged a ‘controlled stop’  and the firearm was wrapped in a black plastic and found in a rear  footwell.

The end of the gun was visible and no ammunition was found in the vehicle or during a search of the defendant’s home.

He also said that the defendant admitted buying the weapon for €500 ‘for his own protection’ and he was on his way home at the time.

Members of the Emergency Response Unit as well as Armed Support Unit gardaí were involved in bringing the vehicle to a halt.

The accused was the sole occupant of the vehicle at the time.

The court also heard that the gun is with ballistics experts and a preliminary report indicated it is capable of being used.

Asked by Judge Zaidan who the defendant was afraid of, Garda Tone said: “We don’t know that (and) we’re not aware of any threat to his life.”

Sgt Brian Jacob said a sawn-off firearm is much easier to conceal and gives ‘a wider range for a shot’.

The defendant is on bail for an allegation of assault and an alleged breach of the Public Order Act and has no history of bench warrants.

Cross examined by defending barrister Mark Gibbons, the garda said he did not believe the defendant would turn up for trial because of the seriousness of this allegation and he objected to bail.

Mr Gibbons said the defendant lives with his parents and two young children. He said he was prepared to provide an alternative address, give his phone number to the gardaí and observe ‘signing on’ conditions as well as surrendering his passport.

He added the defendant’s stepfather was willing to provide a bail surety.

Sgt Jacob said the incident arose from a targeted search by the ERU.

Judge Desmond Zaidan commented that the defendant is presumed innocent and he was not hearing the merits of the charge.

The judge said a High Court decision meant that there does not have to be a history of bench warrants for bail to be denied.

He refused bail, adding that strict bail conditions would not be appropriate and he adjourned the case to Thursday next (April 7), when the defendant is likely to appear via video link.