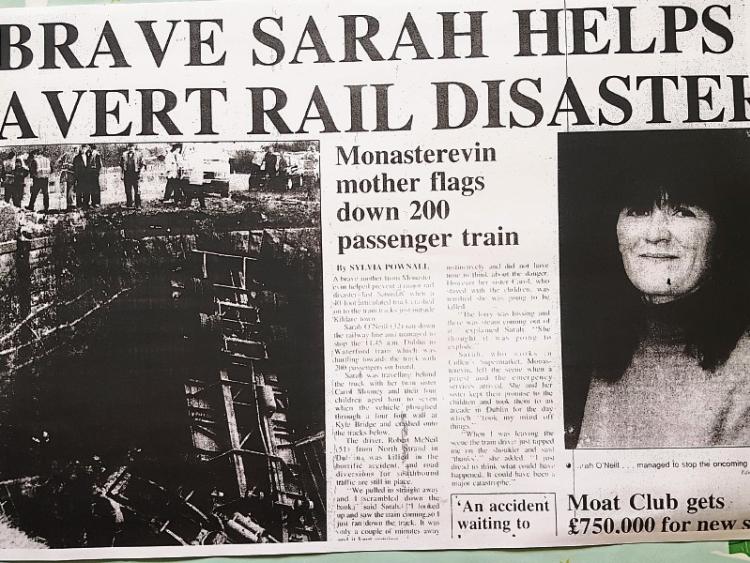 A brave mother from Monasterevin helped prevent a major rail disaster last Saturday when a 40-foot articulated truck crashed on to the train tracks just outside Kildare town, the Leinster Leader reported on April 1, 1999.

Sarah O’Neill (32) ran down the railway line and managed to stop the 11.45 am Dublin to Waterford train which was hurtling towards the truck with 200 passengers on board.

Sarah was travelling behind the truck with her twin sister Carol Mooney and their four children aged four to seven when the vehicle ploughed through a four foot wall at Kyle Bridge and crashed onto the tracks below.

The driver, Robert McNeill (51) from North Strand in Dublin, was killed in the horrific accident and road diversions for southbound traffic are still in place.

“We pulled in straight away and I scrambled down the banks,” said Sarah. “I looked up and saw the train coming so I just ran down the track. It was only a couple of minutes away and it kept coming.

“I felt like I was running and running and I would never get to the train. I took off my jacket and waved it and eventually the driver stopped. He had not heard anything on his radio about the crash.”

Sarah said she just reacted instinctively and did not have time to think about the danger. However, her sister Carol, who stayed with the children, was terrified she was going to be killed.

“The lorry was hissing and there was steam coming out of it,” explained Sarah. “She thought it was going to explode.”

Sarah, who works in Cullen’s Supermarket, Monasterevin, left the scene when a priest and the emergency services arrived.  She and her sister kept their promise to the children and took them to an arcade in Dublin for the day which “took my mind off things”.

“When I was leaving the scene the train driver just tapped me on the shoulder and said, ‘thanks’,” She added. “I just dread to think what could have happened. It could have been a major catastrophe.”

Meanwhile, the same issue reported that the dangerous conditions at Kyle Bridge just outside Kildare town meant it was “an accident waiting to happen,” according to Cllr Sean Ó Fearghaíl.

The Kildare-based county councillor has been lobbying for years to have the dangerous stretch of road from Kildare town to Monasterevin made safer for motorists. “The road in general is very dangerous and there have been a large number of fatalities over the years,” he said.

A number of people have lost their lived on the route, including all three members of the Mooney family from Monasterevin who were killed outright in a crash just outside the town in 1997.