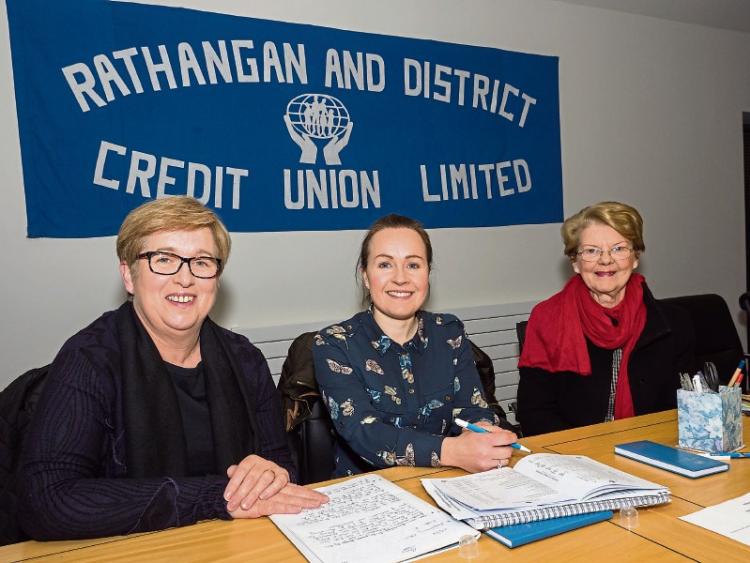 Despite a tough year on the investment front, Rathangan Credit Union was once again able to offer a dividend of .1% at its 47th AGM last Wednesday night, January 10.

“2017 has been a challenging year for our Credit Union. Interest rates for investments remain very low with no prospect of an increase in the short term. However, the investment committee, with the assistance of Davy Stockbrokers, are working diligently to obtain the best rates for the members,” said chairperson Brenda Kennedy.

She explained that lending was the lifeblood of any Credit Union and encouraged people, who are thinking of taking out a loan, to borrow from them, rather than opting to take money from their shares, or signing up with a bank. She said there were currently no banking facilities in the town and the branch was upgrading it services to allow electronic transfers.

When asked if online banking would be provided, manager Grainne Forde said that was coming down the line but would take time.

This was the first AGM missed by founding member Bill Kiernan in 47 years, and Ms Kennedy acknowledged his contribution.

Questions were raised about the amount of documentation needed to take out a loan. One member asked that the branch petition the Central Bank to relax its rules, especially if the member had more money in their shares that they were borrowing.

Another member asked “Who is running the Credit Union? As far as I can see, it’s the Central Bank, is it a community Credit Union anymore? If someone, who has been with the Credit Union for 30 years comes along looking for a loan, you know them, you know their ability to pay and you still need them to get all this documentation.”

Former manager and credit committee member, Rose Martin said she appreciated where he was coming from, but the Credit Union had no choice but to abide by Central Bank rules. She said the financial institution was subject to inspections, and if the documentation was not on file, they would be reprimanded.

Ms Kennedy said the rules worked both ways, and ensured the members’ money was safe and everyone who applied for a loan was treated equally.

Another member asked about the growing trend of merging small Credit Unions. Ms Forde said overheads were quite high for smaller Credit Unions and the Central Bank was encouraging mergers, but she said the jury was still out as to whether they would be successful or not.

Auditor Michael Casey said the Credit Union had in excess of the required amount in reserves and it was important that people continued to support it. He wished it well for 2018.

Another member pointed out money could be saved by emailing out the AGM brochure instead of posting them out.
Ms Forde said there was a legal obligation to provide every member with the accounts seven days before the meeting and there was a data protection issue in relation to email.

Another member asked why the cap on the amount of shares a member could have had been dropped from €68,000 to €40,000. Ms Forde said the insurance costs were high on the shares so they had to reduce it.