What's On column: A glimpse into the Liffey’s secrets

Kevin Dowling from Kildare takes a look at the latest films, series and documentaries 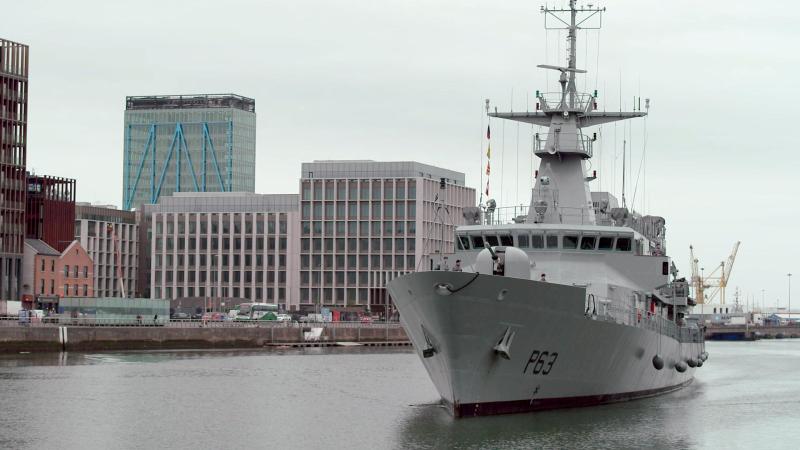 The LE William Butler Yeats on the Liffey. picture: rtÉ

The Liffey has had huge cultural and environmental resonance in this part of the world for millennia.

Rising as a cold stream in the foothills of the garden of Ireland, it follows a broad arc through Kildare and on towards Dublin. It then slows and widens, emptying its brackish waters into the Irish Sea. At 132km, the Liffey is not Ireland’s longest river, but it is one of our most celebrated. No wonder, then, that it now has its very own TV series (The Liffey, RTE1, 7.30pm, Sundays).

The show is written by Joseph O’Connor and narrated by Angeline Ball. O’Connor’s literary nous lends a poetic feel to the way the characters and vignettes in the program are described. The show explores some lesser seen parts of the river, and we gain an insight into the lives of the characters who spend their lives working on and along the watercourse.

In the first episode, we meet David Green of Dublin City Council Drainage Department. He has spent a significant part of his adult life plodding through the claustrophobic warren of tunnels under Dublin city that house the now completely covered River Poddle. As Green hunkers down below an underground archway built in 1860 you get a sense of the complexity and beauty of a veiled world, hidden just below our feet. As revellers enjoy a few pints in Temple Bar, a man plods through eerie tunnels just metres below them.

Green’s journey begins just across from the Olympia Theatre on Dame Street, and the camera crew follow him along the stream until he eventually emerges into daylight, where the Poddle flows into the Liffey at Wellington Quay.

The story then moves on to other people who spend their lives working in the service of the public along the waterway. The film crew board the Irish Navy ship LE William Butler Yeats and we get to meet the crew, who spend long periods away from their families out at sea. As their ship makes its homeward journey past the iconic Poolbeg Stacks and on up the Liffey to dock, there is a beautiful aerial shot of the ship from above, striking but slightly incongruous amongst all the bling of the IFSC.

We are informed that when a party of Vikings marauded along the East coast in the year 841 and entered the mouth of the Liffey, they sailed upstream to where the Poddle flowed into the larger river, forming a deep pool. This pool was known as Dubh Linn.

“Thus the river baptized the new city’ remarks the narrator. When you think about it, it’s not just our capital that owes its name to this fine river. Newbridge, Leixlip, Poulaphouca, Liffey Valley and Whitewater are just a few obvious examples.

Jack B Yeats’ painting The Liffey Swim caught all the drama of the annual swimming competition on the river. In Dublin city, the svelte twin-Calatrava bridges span the Liffey as elegantly as a pair of swans. These bridges are named after James Joyce and Samuel Beckett, who presumably spent more than a little time themselves peering into The Liffey’s dark waters, looking for answers. Even Bagatelle had a go: ‘and the Liffey as it stank like hell’.

Future episodes will no doubt take a look at this symbiosis between the river and the communities who live in its environs.

Even if you have no intention of ever swimming, sailing, kayaking or fishing in this river, it’s an interesting show that makes a welcome break from the glut of property content on TV at the moment.