Historian James Durney examines the evacuation of the British army from Kildare on May 16, 1922 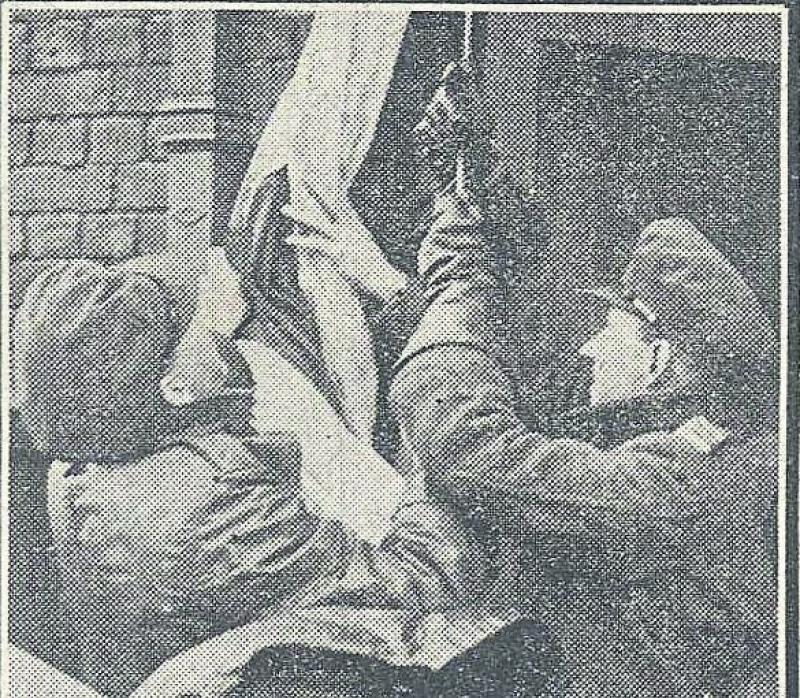 After the signing of the Anglo-Irish Treaty on December 6, 1921, enlistments to the Irish regiments of the British Army were suspended.

In February 1922, the British Secretary of War announced the disbandment of six Irish regiments, including the Royal Dublin Fusiliers. The last detachment of the Royal Dublin Fusiliers left Naas Military Barracks on February 7. They marched out through the front gates and down through the town to the railway station. Many of their friends and relations were waiting at the platform to bid them farewell. On the previous night they had marched through the town singing The Wearing Of The Green.

Their destination was Bordon, Hampshire, where they joined the 1st Battalion. The Dublins’ departure ended over one hundred years of links with the British Army and Naas Military Barracks. Naas Barracks continued to be used to house troops in transit until that May.

Recruitment in Ireland to all other branches of the British Army was closed in April 1922. The formal disbandment ceremony of the Irish regiments took place on June 12, 1922, when the regimental colours of the five Irish regiments — Royal Irish Regiment, Connaught Rangers, Leinster Regiment, Royal Munster Fusiliers and Royal Dublin Fusiliers — were handed over to King George V at Windsor Castle, London.

Clogheen, Co Tipperary, was the first British Army barracks handed over to the republican forces (January 28, 1922), while Beggar’s Bush, in Dublin, became the first important public display of the transfer of British Army property to the Provisional Government (January 31, 1922).

By April, 41 of the 54 military station locations — including Kildare Barracks — in southern Ireland had been evacuated, leaving the British Army concentrated in County Kildare and Dublin City.

On May 10, the Final Orders for the evacuation of the Curragh Camp were issued, stating that the evacuation would be worked from a zero hour of 10.30am on May 16. The occupation of Hare Park by an advance party of 80 National Army troops took place on the afternoon of May 15.

On the following morning, Irish and British officers met at the Staff House and in heavy rain proceeded to formalise the transfer of the camp from British control to the Provisional Government.

There was no exchange of compliments between both groups, and the British soldiers marched off as the Irish troops approached.

Groups of Irish and British officers proceeded to inspect the perimeters of the camp. Then the two remaining platoons of soldiers, from the Northamptonshire Regiment, formed up. The Last Post was sounded, and the hand-over was officially completed. 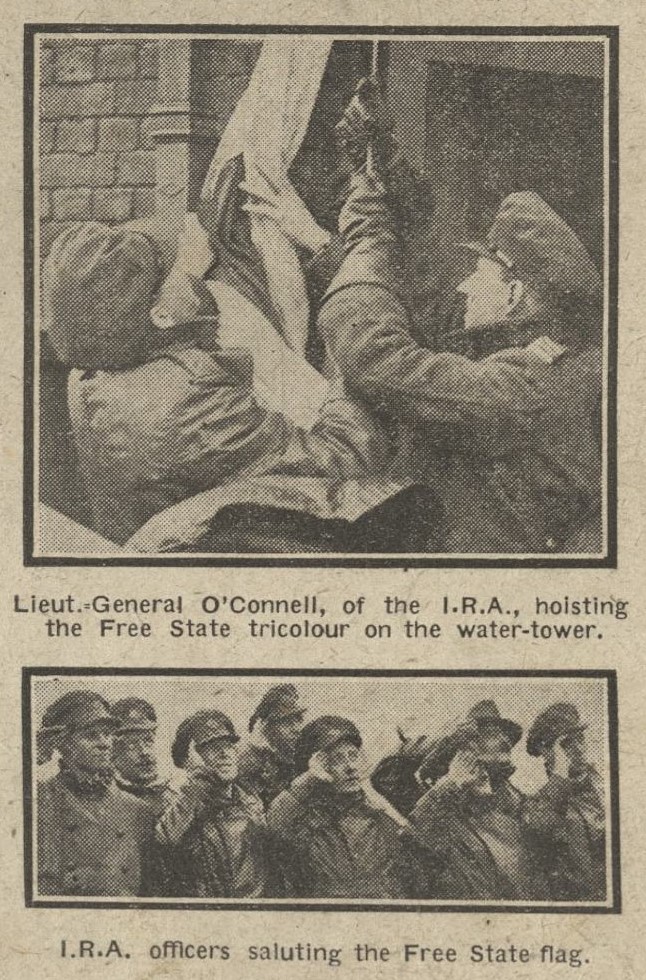 A newspaper clipping from the Daily Sketch on May 18, 1922, reporting on the take-over of the Curragh Camp. Courtesy of Kildare Local Studies, Genealogy & Archives

The Freeman’s Journal reported: ‘That the significance of the event needed no emphasising… there was no ceremony to mark the surrender of this, the greatest of England’s military strongholds in Ireland.’

When the Irish troops went to hoist the tri-colour they found that the British had cut down the three flag poles in the camp. When two Board of Works men set about repairing them, they were arrested.

It was mid-day before a pole was found and Lieut General JJ ‘Ginger’ O’Connell, OC, raised the Irish flag on the water tower.

Hester Dooley was the only woman present at the hand-over of the Curragh Camp on May 16, 1922. She lived at 41 Duke Street, Athy before moving to Dublin in February 1921 to work in the Republican Publicity Department.

Hester became secretary to Pieras Béaslaí (editor of An tÓglach) and later secretary to Gen Ginger O’Connell, when Béaslaí travelled to the USA. She also worked for Dublin Brigade OC Oscar Traynor and carried dispatches and messages to prominent republicans. After the handover she remained at the Curragh Camp as a clerical officer for about one month. In 1923 Hester Dooley married Athy republican Joe May.

The evacuation of the Curragh was co-ordinated with the evacuation of Naas Military Barracks and Newbridge Cavalry Barracks. At 10.30am Newbridge Barracks was formally handed over, following which 200 trainee Civic Guards from Kildare Barracks were billeted there. Again, there was no ceremony, except the change of guard. As reported, everything ‘passed off in a business manner’. 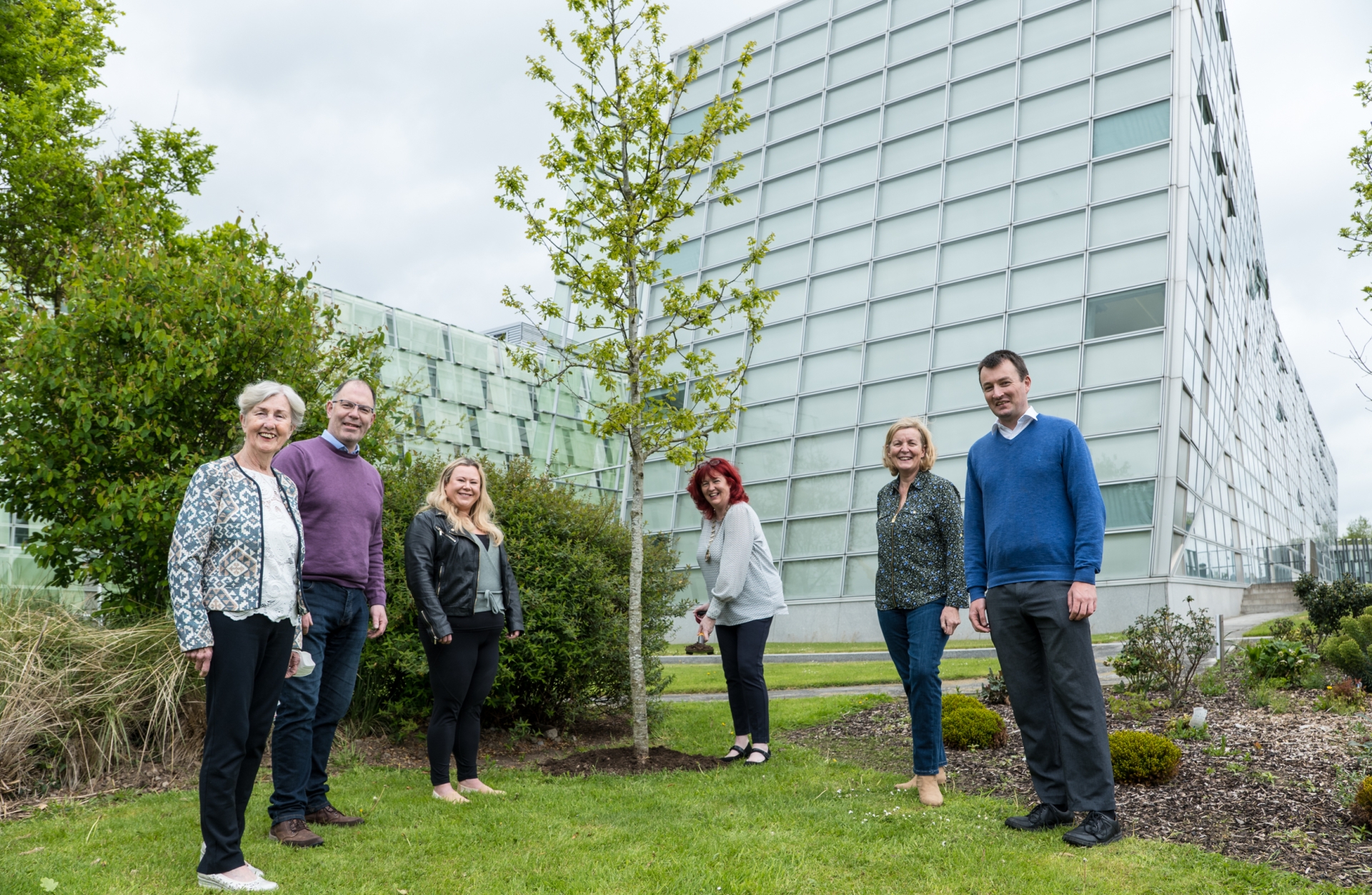 In Naas the last British troops in the barracks were a company of the Leicester Regiment who handed over the installation to Irish troops headed by Colonel Commandant Seán Boylan, Brigadier Thomas Lawler (Halverstown, Naas), and Captain John Joyce.

There was no ceremony to mark the occasion as the Leicesters had sawn down and removed the flag-pole so that the tricolour could not be hoisted until the new garrison had located and erected a temporary one alongside the main gate. (On evacuating a military installation, the removal or destruction of flag-poles was a long British tradition.)

The Leinster Leader reported that the departing military convoy took an hour to pass through the town of Naas and that ‘there were several machine guns at the ready position and many light armoured cars in evidence’. Crowds of people had turned out along the road to Dublin to witness the passing of the British forces, but few cheered them.

The Kildare Observer reported that: ‘Tuesday of the present week marked an epoch in the life of the Co Kildare, when there was a complete evacuation of the British military from posts that have never previously been unoccupied. Chief of these places, of course, was the Curragh Camp, which has been the headquarters of the British Army in Ireland, and in which at all times anything from six to 16,000 troops were quartered. On Monday final movement of troops from the Curragh commenced, a constant stream of lorries passing through Naas towards Dublin.

‘The new army took up its quarters, and the Curragh, associated from time beyond the memory of the oldest inhabitant with the British Army, had passed into Irish hands and became the headquarters of the Irish Army.’

However, the evacuation of the Crown forces from County Kildare was a huge blow to the local economy and caused a collapse in trade.

Newbridge, built around the military barracks, was ‘like a ghost town’. Unemployment in the area was sharply felt — 1,000 workers who had served the garrisons had lost their jobs and in North Kildare 3,000 men were out of work.

A deputation of residents from the Curragh and Newbridge, led by Jack Fitzgerald, a member of Kildare County Council, met Michael Collins and several of his ministers.

They were informed that the Curragh Camp was about to be reopened by the National Army and by August the employment of civilians in the Curragh and Newbridge barracks began.

James Durney is a historian in the Local Studies, Genealogy and Archives section, Kildare Library and Arts Service