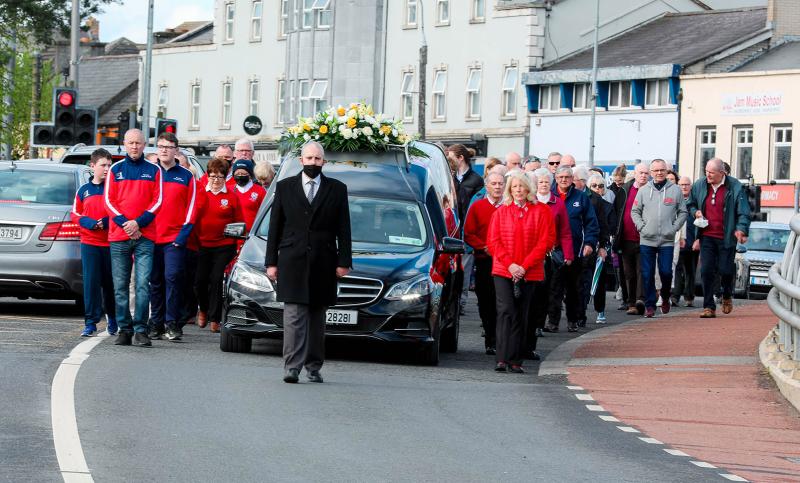 The late Pat Tinsley of Newbridge was laid to rest on the morning of Easter Monday, April 18, following a Mass at St Conleth’s Church in Newbridge.

It was announced last Friday that Pat had passed away at Beech Park Nursing Home after his very courageous four-year battle with amyloidosis.

Speaking at the Mass, Fr Michal Cudzilo, CC, said: "Some people say that when someone dies, it is like a star falling from the sky.

"At death, something irreversable but beautiful happens: this is why we treasure memories."

He then pointed out how this related to Pat, saying that he had ‘a real sense of beauty’ and commended his work with the Parish News and Views magazine.

Fr Cudzilo also said that Pat had a huge passion for pitch and putt, and although he had no children of his own, he was very thoughtful of his nieces and nephews.

"Pat died in peace, and without fear... we pray for him to find happiness in God’s house."

One of Pat’s brothers, Brian, also read a eulogy.

He began by saying how Pat would be pleased to see so many people turn out to honour his memory.

He also thanked Beech Park Nursing Home and St James’ Hospital for looking after Pat, adding that they did ‘absolutely incredible’ work.

Commenting on his brother’s reaction to his illness, he said: "Some days he would be angry (over it), but he eventually realised that he was getting the very best of care.

"I don’t know how he managed to keep his sense of humour during it.. he was incredible."

Brian also said that his brother was a ‘one-of-a-kind individual,’ and also pointed to his time abroad, and especially his fondness for the Caribbean.

He also recounted the time when Pat revealed to him that he supported both Sarsfields and Moorefield, Newbridge’s GAA arch-rivals.

‘COME ON THE FIELD’
Brian said when he asked him what he would say whenever they played against one another, Pat told him: "I say, ‘Come on the field!’"

Brian continued: "Pat had many friends... he was good natured, and also stubborn and not a lover of a authority, but in a positive way.

"He was also very popular with the ladies, he was a very handsome man: like most of the Tinsley men!"

Brian concluded by saying that Pat would be looking down on them from Heaven, taking photos, so he urged everyone in attendance to smile for Pat.

Pat was then carried out of the church to the Jamaican folk song Day O, and was later buried at St Conleth’s Cemetery.

He is survived by his loving brothers Frank and Brian, sisters-in-law Frances, Patricia and Bridget, nieces and nephews, and other extended family and friends.