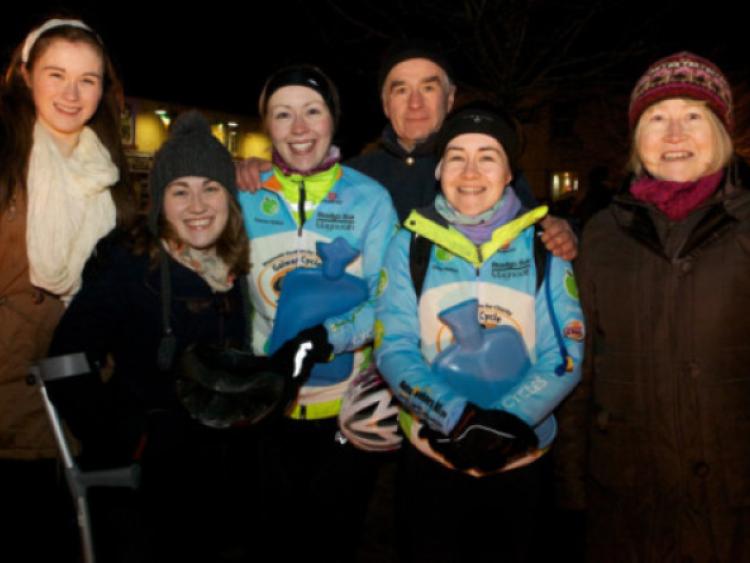 The 26th Galway Cycle has raised more than €130,000 for the Johnstown-based Jack and Jill Children’s Foundation.

The 26th Galway Cycle has raised more than €130,000 for the Johnstown-based Jack and Jill Children’s Foundation.

The money will be used to fund 8,000 hours of nursing care for families around the country who avail of the services of the charity.

Some 242 cyclists braved some of the worst weather ever seen by veterans of the event when they left NUI Maynooth at 6.30 on Friday morning, March 22.

A cold and driving rain was incessant throughout the day, with only small and intermittent breaks as the group headed west.

And after 7 hours, 54 minutes in the saddle, the group completed the 194 kms trip and arrived into Eyre Square wet and cold but content.

The following morning, the cyclists and supporters took to the streets of Galway and managed to collect almost €10,000.

And on Sunday morning, the cyclists remounted their bikes and pointed for home.

An easterly gale that never subsided all day had a major tiring effect on the group throughout the day, and by the time they pulled into Mother Hubbards, near Enfield for their final stop of the day, the numbers in the group were down to approximately 110.

With temperatures barely registering above zero, the wind took its toll on the average speed, which dropped from 23.8 kph on Friday to 21kph.

It took the weary travellers 9 hours and 14 minutes to make the return trip and there were a lot of tired bodies by the time they arrived back into the square in Maynooth.

“It was an epic weekend,” President of Maynooth Students for Charity Emma Kilgannon told the Leinster Leader.

“It was dreadful weather on both days that we were cycling, but it was lovely in Galway on Saturday and we did very well.

“But the most important thing of all, is that we’ve raised €130,000, and counting, for this wonderful charity.

“It’s been a wonderful experience for us in working with the team at Jack and Jill,” she stressed. “One of the parents who has received assistance from the charity addressed us all on Saturday night and his story had a profound effect on everyone there.

“It’s been a proud honour for us to do what we can to help Jack and Jill.”

Edele Monahan of Jack and Jill said she was “blown away” by the entire weekend, and was “over the moon” with the money raised.

Jonathan Irwin, the co-founder of Jack and Jill tweeted his appreciation for the participants several times over the weekend. On Friday night he wrote: “NUI Maynooth peleton arrived on time in Eyre Square Galway on possibly the worst weather day ever. So admire everyone of 300 of J&J cycle.”

He had asked his almost 2,000 followers on Twitter to “spare a thought” for the cyclists who were encountering weather “that drove Walter Raleigh back to England”.

Speaking on Saturday, NUI Maynooth president Philip Nolan spoke of how behind the hustle and bustle of modern life, many people experience great difficulty, and how proud he was of the cyclists and what they had done for those in such circumstances.

The money raised by the students brings the total raised over 26 years of the event to just over €1 million. For more details, or to donate, see galwaycycle.ie or jackandjill.ie.