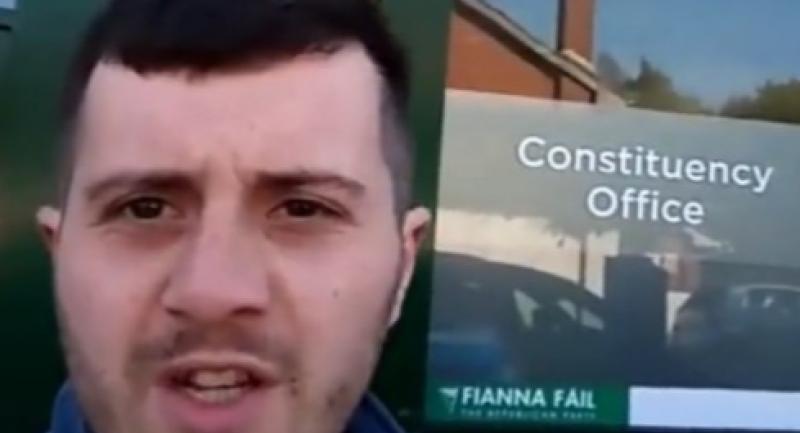 A video has been shared on social media which shows a member of an environmental group lobbying outside the office of a Kildare TD.

In a statement explaining its actions, the Social, Economic, Environmental Forestry Association of Ireland (SEEFA) has said that it will stage a series of social media protests targeting local Government TDs, in an effort to highlight what they describe as "the ongoing crisis in the forestry sector."

SEEFA, which was first set up last month, explains that it is "an alliance of private industry professionals who are lobbying for the Government to fulfil its obligations to maintain employment for more than 12,000 people in the sector which has been devastated by a backlog in the granting of afforestation & felling licenses."

"SEEFA is seeking direct intervention from the Department of the Taoiseach, as all other options have failed," it added.

The news follows just after the group posted the aforementioned video on its official Twitter page.

One member of the group, Ivan Fennell, can be seen protesting outside of Fianna Fáil TD James Lawless' office in Naas.

Mr Fennell said in the video: "I am here protesting as I have been left with no choice but to protest in the matter of Minister Charlie McConalogue, and Green Party Senator Pippa Hackett, with responsibility for (the) forestry sector and the civil service, who are destroying our industry."

He then directly addressed An Taoiseach Michéal Martin, saying: "It is time for change."

In a follow up tweet, SEEFA claimed that house prices are inflated, and as such, it has to "import timber because we can’t get licences to cut our own."

SEEFA has also pointed to a statement by Fianna Fáil politician Jackie Cahill TD and Chair of the Oireachtas Joint Committee on Agriculture, Food and the Marine.

Mr Cahill said: "We have seriously missed our targets in the programme for Government on afforestation... we are 15,000 behind target on afforestation in the last five years and if those trees had to be planted in their lifetime they would have sequestered 5.4 million tonnes of carbon."

"We have really missed an opportunity to benefit the rural economy and in our fight against climate change."

He further claimed that Ireland's failure to issue licenses and its failure to plant trees for afforestation "is haunting us, and will continue to haunt us in the years ahead because we can’t reclaim that lost time."

In terms of social impact, SEEFA claims that it is highlighting that forest owners cannot plant their land, manage their forests or sell their timber.

"For many owners, this is their pension or the manner to pay for education for their children; the implications of this crisis will be felt for many years to come," the group added.

SEEFA also maintain that home construction is being affected, with Marina Conway, a member of Western Forestry Co-Op, explaining: "Previous governments have invested over €3 billion in this industry over thirty 35 years and over 20,000 farmers have committed their land to forest, these forests are now maturing, and private timber is ready to harvest; but instead, sawmills are having to import timber to meet demands of other sectors – particularly construction."

"Local timber needs to get to the market to maintain the forest supply chain, maintain rural jobs, keep local sawmills functioning and protect the economic benefits to rural communities."

Paddy Bruton, Forestry Services Limited and Euroforest Ireland, also commented on the matter of forestry in Ireland: "Afforestation is clearly the largest opportunity in the land use sector to remove carbon dioxide from the atmosphere. Government afforestation targets are not being reached and in 2020 only 2,300 hectares were planted of an 8,000 hectare target."

"In the last 5 years, afforestation targets have been missed by over 15,000 hectares in total or the equivalent of 40 million trees."

"Had this area been afforested, it had the potential to remove 5.4 million tonnes of carbon dioxide from the atmosphere over the lifetime of those forests," he added.

SEEFA counts a wide range of environmental groups in its ranks, including Not so Hardy Forestry, Arbor Forest Management, The Forestry Company and Axe Forestry Ltd.