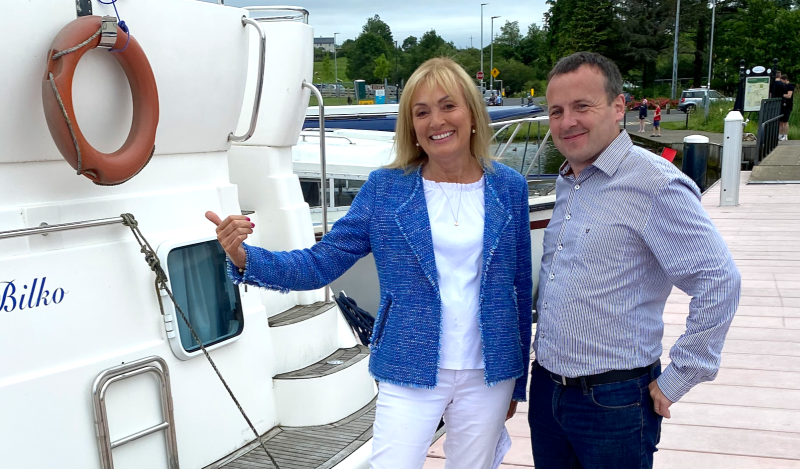 A well known Kildare production company has joined forces with presenter Mary Kennedy to follow the lives of people who decided to make major changes in their lives and move to the West of Ireland.

The entire Dundara Television and Media crew, led by Allenwood man Enda Grace, decamped to the west of Ireland earlier in
the summer for seven weeks to film the new series for TG4 called Moving West.

In this inspiring six-part series, viewers will discover a genuine message, that life, and in particular your career won't take a step back by moving to the west of Ireland.

"The series which will first go to air next Thursday September 23 on TG4 and will comprise of six half hour episodes and explore the many opportunites for a new life across the western seaboard. Each episode will take an in depth look at the opportunities and challenges presented by moving west and throughout the series viewers will see that the region is populated with major national and global companies, with a thriving start up ecosystem whilst yet retaining its natural charm and beauty," said the company.

Tying in with the Western Development Commissions More To Life campaign, this new series, presented by renowned broadcaster Mary Kennedy, will show the public the possibilities if they decide the West of Ireland is the right place for their next move.

Shot against the backdrop of the unique natural beauty and culture of the West of Ireland, over the course of six half hour episodes the show will follow the lives of six families who have moved or are in the process of moving to the west of Ireland.

According to the producer and director Enda Grace, the series is very timely.

“The Covid-19 pandemic gave people the opportunity to re-assess their lives in many ways. Remote working and the hybrid model of work have suddenly become very real options. Covid-19 has propelled the concept of working from home which makes such a move no longer a dream for many people," he said.

"In the past, people thought moving West wasn’t a viable opAon due to deficiencies in broadband, infrastructure or lack of career opportuniAes. We found when filming the show that these barriers are no longer in place, with many choosing to work from a hub, start their own business and ample job opportunities across all sectors from FDI to indigenous.”

The series explores the families, couples and individuals’ motivation to move while shining a light on all the west Ireland has to offer in terms of lifestyle, outdoor ameniFes, food culture and quality of life. The show follows the families on their relocation journeys and in each episode the viewer gets to take a peek behind the curtains of the county, the local communities and those driving the region into the future.

Mary Kennedy is one of Ireland's most renowned and much loved television presenters.

Enda said her ability to put people at ease is key to creating this warm and informative series.

"Mary's love of the west of Ireland is also compelling and she spends quite a bit of time with her sister Deirdre who lives on Inis Meain," he added.

“I think the series is very timely and I think it fits in very nicely with a different way of thinking about living and working
which developed during the pandemic” according to Mary.

“I’m a Dub, but I just love rural Ireland. The series is in a bilingual format in Irish and English and I just relish having the opportunity to use my Irish, a language I love. I really enjoy working with Enda and the team and meeting such inspirational people who had made the move west. It’s a very genuine and lovely series.”

This is the first of two series that Kildare’s Dundara Television & Media have coming to TG4 this Autumn/Winter.

The second series of their successful “Guaranteed Irish” format will hit the screens later in the year. Moving West begins on TG4 on Thursday 23 September at 9pm and is repeated every Monday at 7.30pm