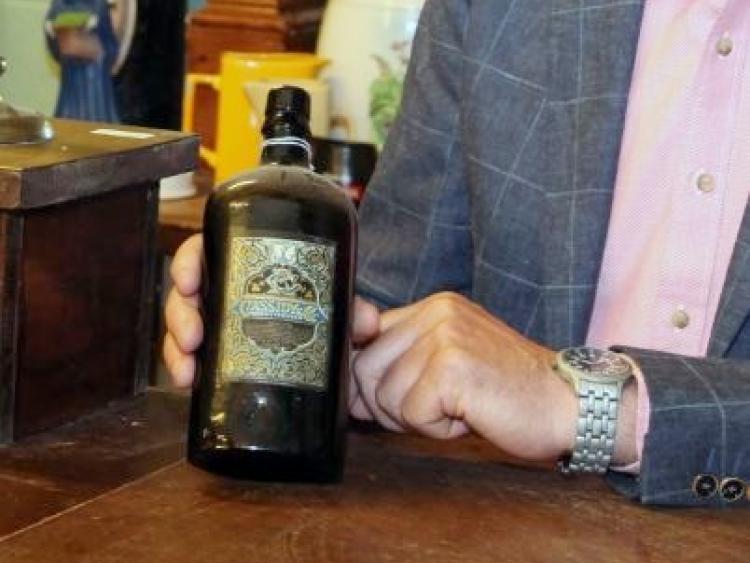 The famous bottle of whiskey from Cassidy's, Monasterevin

A rare bottle of old Irish whiskey has fetched a staggering €23,000 at an auction earlier this week.

Predicted before the auction to sell for between €5,000 and €10,000, the bottle of County Kildare whiskey, which is one of only two known surviving bottles with the other being safeguarded in the Irish Whiskey Museum, far exceeded the expectations of the team at Victor Mee Auctions.

Commenting on the impressive ‘hammer price’ of €23,000, auctioneer Victor Mee said, “We knew this bottle was extremely special, as it is one of the rarest we have come across in many years of dealing in whiskey and pub memorabilia. There were many bidders from far and wide interested in the bottle of Cassidy & Co. Monasterevin whiskey, however we are delighted to say it will stay in Ireland.”

The 1880s bottle of Cassidy & Co Monasterevin whiskey was matured by the Cassidy family, who made whiskey at the Kildare mill from 1784 until 1921.

In addition to the 1880s bottle of whiskey, ‘The Clermont Collection Rare Advertising, Pub Memorabilia and Architectural Fittings’ sale saw many other pieces from the historic watering hole surpass their estimates once they hit the auction block.

Two extremely rare James Mc Kendry ‘Ballymena Importers of’ advertising mirrors also sold for over €4,000 each, having been predicted to sell for between €1,200 to €1,800.

“These high-performing items from our most recent sale are a testament to the wide base of keen collectors and buyers that attend our monthly sales in our Cavan-based auction house, online, and down the phone,” added Victor Mee.

“We enjoyed some tense bidding on key pieces from this legendary pub, with former patrons, avid collectors, and local residents alike all keen to get their hands on a piece of Irish hospitality history.”