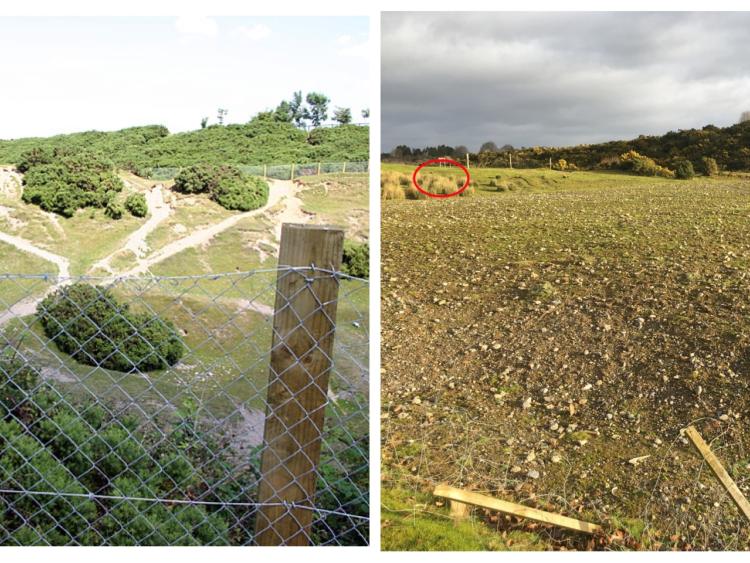 (l-r) Before and after pictures of a hollow, which was filled in near Donnelly's Hollow PICTURES: Cllr Mark Lynch

Claims that organised dumping has taken place on land owned by the Department of Defence on the Curragh Plains were made at a recent council meeting.

Cllr Lynch said there is “ongoing neglectful treatment of the Curragh Plains by the Department of Defence”, but he said it is not the military.

Cllr Lynch claimed the dumping occurred between the summer and Christmas, and that the council knew about this six months ago and nothing has been done about it.

At the meeting, Cllr Lynch said late last year trucks were followed back to a building site in Kildare town.

Cllr Lynch said there also appears to be other material from the Curragh camp being dumped.

“The council seem unwilling to progress prosecution because it is another state department,” Cllr Lynch said later.

“Really it is a deeper issue in Kildare County Council and in the State which is of not holding certain groups/ individuals to account.”

In response, the Department of Defence said they are aware of the situation.

“The Department is aware that material has been deposited in the past in an area of the Department’s lands at the Curragh, adjacent to the site known as Donnelly’s Hollow.

“The Department are continuing to engage with Kildare County Council officials in relation to the matter and has submitted reports from an environmental engineering firm confirming that no environmental pollution has occurred.

“The department understands that no further incidents have occurred since then.” Director of Services for Kildare County Council, Joe Boland, said the issue is a “breach of trust” and “unacceptable”.

Mr Boland said he expects the matter will be dealt with by the department, but if necessary the council will prosecute. However, he said the council will try to resolve the matter without going down the legal route. A report issued at the meeting said a technical assessment of the material was carried out. “It does seem that there is not a danger of environmental pollution,” it noted.