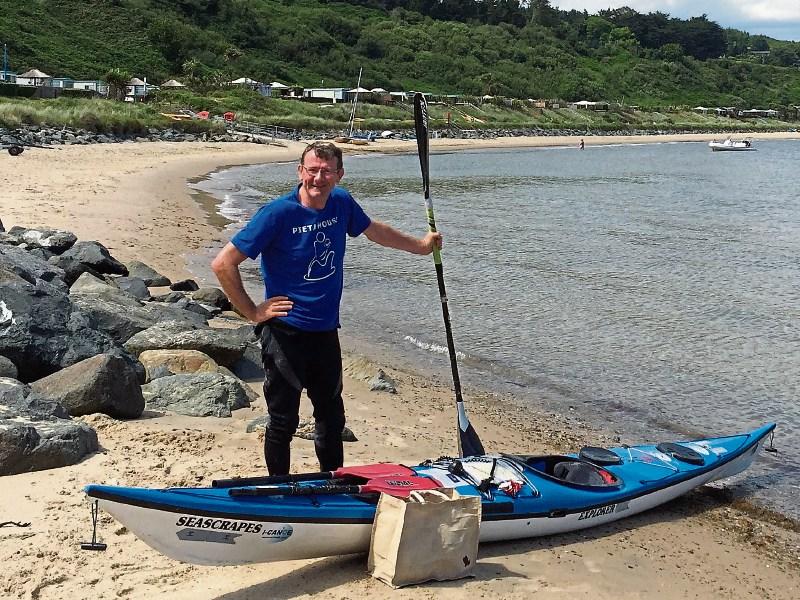 Michael O'Farrell from Newbridge and his kayak

The Newbridge resident managed to raise a whopping €8,500 for Pieta House and the RNLI.

He set out on his epic voyage on May 1 from Bulloch Harbour, Dublin, and headed off in a northerly direction to paddle counter-clockwise around the coast, finishing up at Dun Laoghaire harbour at the end his adventure on July 10.

Michael said; “What drove this circumnavigation was a combination of hearing of others do it, a wish to see the coastline of Ireland ‘from the outside’ and because it is a big ‘bucket list’ goal to chase.”

Kayaking for more than 40 years, he had occasionally thought about taking on the challenge.

“Since the first circumnavigation in 1978 more than 70 people have paddled around Ireland (mostly clockwise and in teams),” he said.

Since Michael took up sea kayaking, he has got to visit many sections of the Irish coastline, but there were places he hadn’t seen and this was a chance to fill in those gaps.

Michael started kayaking in 1974 on the River Liffey and most of his kayaking has been on rivers as a member of Kilcullen Canoe Club (KCC).

KCC has a strong tradition of long distance river racing which helped keep him fit and 12 years ago Michael took up sea kayaking, while still participating in river races.

Fundraising for this circumnavigation started in March.

When Kilcullen Kayak Club hosted a race in early April, Michael appealed for donations and that kicked off the fundraising with €200.

He stresses his employer, AIB, was very supportive when he announced his adventure and hosted a cake sale in April.

Michael and his wife Marie hosted a Tea Party at home in Newbridge where they roped in friends, neighbours, and any kayakers living nearby to have a cuppa and hear the plans.

Since then, donations have continued to be made from work colleagues, neighbours, kayakers, former colleagues (Michael served for some 19 years in the Defence Forces) and people he met along the way .

More than €8,500 in donations was collected.

Michael’s diet was very simple as he set out.

The core ingredients were: porridge/dried fruit/honey and fry ingredients for cooked breakfast; Pitta bread, ham and cheese with tea for two lunches; pasta or rice with meat for dinner.

“I carried a handheld VHF radio and a PLB on my lifejacket. A PLB (Personal Locator Beacon) is a small device that would alert rescue services giving my location if activated,” he explained.

Before he left, a family friend gave him a holy medal and that medal also completed the circumnavigation in his pocket.

Michael brought a camera and his pictures from the circumnavigation are his treasured keepsakes.

The most memorable part was the North coast and especially Michael’s visit to Inishtrahull island.

“The weather was beautiful at the NE corner (Fair Head) and on the paddle to Rathlin island. The sea was calm despite this having fast tides (those tides had doubled the kayak’s speed to 16kph),” he said.

Inishtrahull is the most northerly island off Malin Head and has complex tides.

Slieve League, Co Donegal, was also beautiful as the cliffs were lit by with the setting sun.

He came across loads of seals, but no basking sharks or whales. The adventurer believes this may have been down to lower than average sea temperatures during May and June.

Seal feeding on an octopus

Michael saw a sun-fish and interrupted a seal off the Wicklow coast as he was dining on an octopus (the meal was so big that the seal had to surface to eat it).

Boredom was one of the things he was worried about before he set out — but that didn’t turn out to be the case.

Mentally he felt great during the trip and after the first week he clocked more than 50km on successive days.

Picking up some minor ailments, these were a source of worry, but never developed into problems.

“When I was off the water for 12 days because of bad weather — most of which I encountered on the South West coast,” he explained.

“The most frustrating days were those days when I was stormbound — and wishing to be moving again.”

His wife, Marie, met him at weekends and he got many offers of accommodation along the way, which he took up.

Michael has no new adventures planned for the coming year, but he is back on the water at Kilcullen Canoe Club and will continue to race on rivers and go seakayaking around Dublin Bay.

Michael and Marie want to thank supporters and donors, and they held a special party last Saturday their home in Newbridge to hand over the money to the charities.