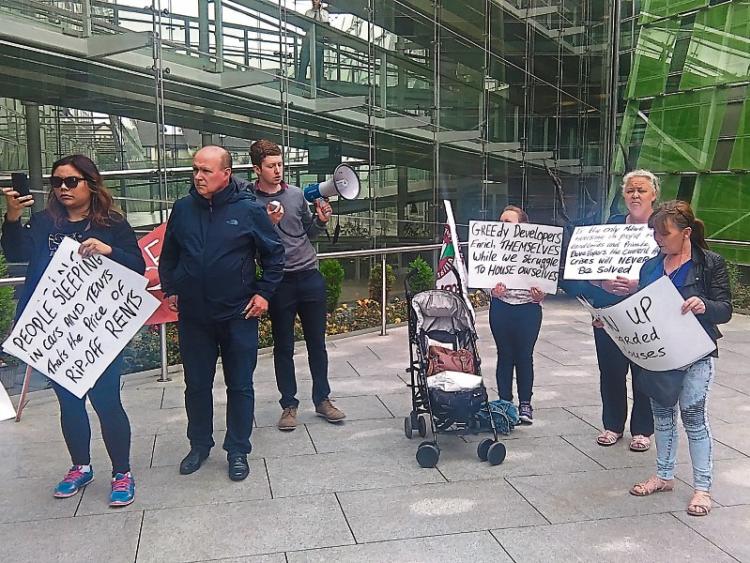 A small but vocal group of People Before Profit activists staged a demonstration outside Aras Chill Dara last Monday.

They included Naas resident and former election candidate Ashling Merriman and they criticised Kildare County Council for not doing enough to tackle the housing crisis.

The group included Sallins woman Eileen Doran, who is seeking a house or apartment for herself and her nine year-old daughter, but for now she lives in B&B accommodation in Dublin.

Ms Doran says this means she must make a 40 mile round trip to pay weekly rent to KCC.

“I’m thankful to have this accommodation but I need something more permanent and the council don’t know when this will be available. There are houses boarded up including in Naas. This a problem that needs to be sorted out,” said Ms Doran.

Ms Merriman said there are 123 people living in emergency accommodation “that we know of” because accommodation cannot be found for them within Co. Kildare. She said there are 5,572 people on the housing waiting list and the actual figure may be higher if people in need of housing have been removed for failing to return questionnaires. She said rents are rising in the county and have risen by as much as 13.8% in a year. She wants the council to use public land to invest in housing.

“The housing crisis is escalating rapidly with record levels of homelessness. At the same time many families with mortgages, who are in arrears, are before the courts on eviction notices,” Ms Merriman added. She said public lands should not be sold to private developers and properties held by NAMA should be used to tackle the waiting lists.