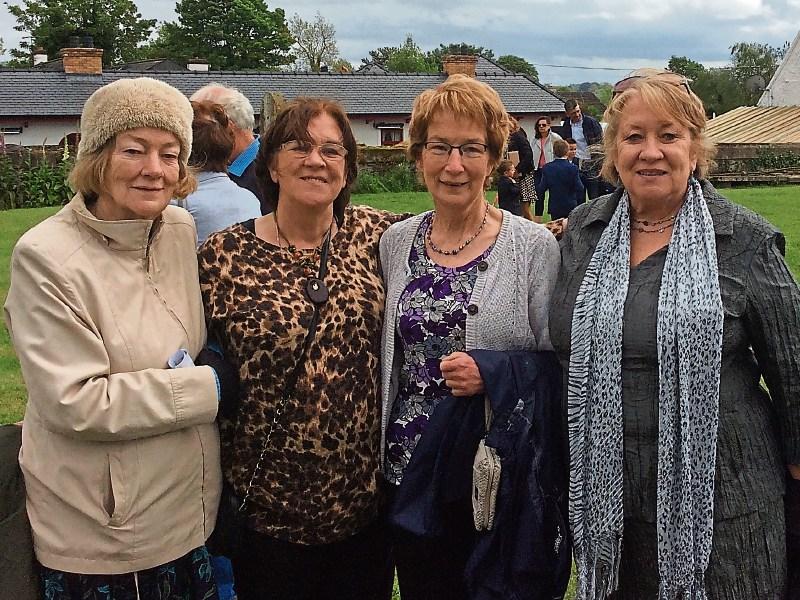 Sisters Alice, Mary, Nancy and Rose O'Hara, who returned from England for the celebrations.

On Sunday, May 21, there was a huge turnout of people from Milltown and 19 local townlands to celebrate the 200th anniversary of St Brigid's Church in Milltown.

The day started with Bishop Denis Nulty and nine priests listening to the lovely school choir, who had assembled in the school yard. They sang the hymns, including the hymn to St Brigid.

At 1.45pm, Josie Byrne rang the church bell to announce the start of the procession from the school yard to the new altar in the grounds of the cemetery.

The procession was led by a piper and followed by people representing the 19 surrounding areas associated with Milltown.

The First Holy Communion and Confirmation group then joined the group and these were followed by the servers, the priests and Bishop Nulty.

The local GAA members formed a guard of honour as the procession moved across the road.

Before Mass commenced, symbols were presented before the altar representing the various clubs, organisations and achievements of local people.

People who came to live in the area were represented by Mary Byrne, who moved from Mayo.

In his homily, Bishop Nulty mentioned that the altar was on the site of an old church, going back to the penal times.

This was noted in Bishop MacGeoghegan's report of 1640.

Another church in the area was on the banks of the canal and locals remember the ruins in the 1970s.

He congratulated the people for having the church and cemetery looking so well.

Around one thousand people turned up for the Mass, and after Mass Bishop Nulty officially opened the heritage centre.

He was joined by local politicians and representatives from Kildare County Council.

Afterwards, everyone adjourned to the newly refurbished Inn at Milltown for refreshements and the afternoon was spent reminiscing.

John Downey provided two bouncing castles for the children and they got icecream cones and minerals.

The children had a ball for the afternoon.

Betty O'Shea, who coordinated the event, paid tribute to the hardworking committee who had painted the church and prepared for this big event.

Jack Dunne, with Martin, Michael and Conor, had the village looking spotless.