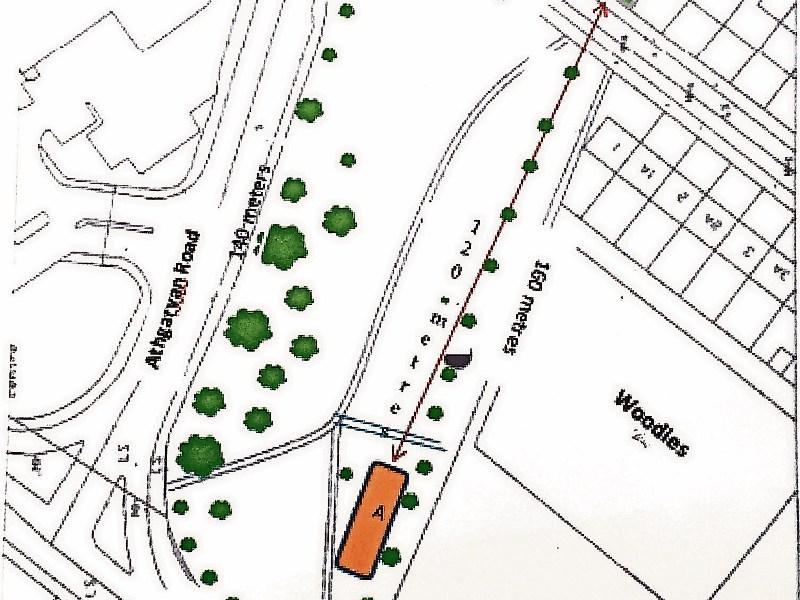 The proposed location of Newbridge skatepark

Moorefield Park resident, Mary Hogan is devastated at Kildare County Council's decision to approve the skatepark location at the green area beside Woodie's in Newbridge.

“I will lie down under the diggers if this goes ahead and I know several other residents who will too,” she said.

“I have nothing against the skatepark itself, but this is not the right location. It just beggars belief. This is the only green belt left in Newbridge town. It’s disgraceful what is happening.”

She said there are alot of elderly people living in Moorefield Park and they just want to go about their business in peace and quiet.

She said the skatepark would be a hazzard to traffic. Ms Hogan also said the residents were also concerned about grafitti, and anti-social behaviour.

“When I am going up the town, I am going to have to walk the long way around to avoid it. Don’t get me wrong, I am a grandmother, I have grandchildren and when the skaters were down at the Riverbank, they were very polite and always stepped out of the way, but not everyone is like that,” she added.

However, the campaigners for the Newbridge Skatepark are thrilled with last week's council decision.

“The Skate-park for Newbridge group are delighted that the councillors have voted overwhelmingly in favour of progressing the skate-park at the proposed location,” said group spokesperson, Anthony Moss.

“We thought the Kildare County Council (KCC) report was excellent and detailed and dealt with any objections very comprehensively.

“We were happy to note that KCC recommended the skate-park location very clearly.

“It is vital now that the Council not delay in the next stages of completing this long overdue amenity for the people of Newbridge.”

Many of the orginal skateboarders who started the campaign are now adults. The project hit many stumbling blocks over the years because of the difficulty in finding a suitable site.