All systems go at Curragh for season opening this weekend

Racing to continue in 2017 despite major construction work A view of the new temporary facilities at the Curragh

It’s business as usual at the Curragh while the extensive redevelopment of the home of Irish flat racing gets underway.

The opening weekend of the 2017 season takes place this Saturday and Sunday, with the Newbridge Parishes Race Day, featuring free entertainment for children and live music, sure to draw a huge local crowd on the 14th.

Work began at the start of March on demolishing the grandstand, as part of the €65 million revamp of the facility which is due to take two years.

The decision was made to keep racing at the Curragh during the construction phase, with a limited crowd capacity of 6,000 and temporary facilities. This season will feature 18 days of racing, including four classic weekends — the Guineas, Derby, Oaks and Champions weekend.

However, punters will not have to suffer through a day out on a building site. The Curragh team has worked hard to ensure that top-class accommodations are in place to welcome crowds to the racecourse.

Trainers, owners, jockeys and other racing personnel got a first glimpse of the new facilities last Thursday when the Curragh staged a Test Day to fulfil Turf Club licensing.

Attendees were shown the facilities which have been put in place for this season, including the refurbished stable yard, while a small group of horses galloped on the track over 6 and 12 furlongs.

Curragh based trainer Willie McCreery commented: “I was impressed by the layout and facilities which I viewed for the first time today and it was good to see that the track is in great condition. I am looking forward to having runners throughout the season with hopefully some winners amongst them.”

The stands will be totally demolished by early June. Part of the work has involved the careful preservation of the 1850s Queen’s Room — where Queen Victoria was entertained during her visit to the Curragh — and part of a wall which dates from that period, which has been saved as part of the Curragh.

The O’Brien’s Champagne & Wine Bar remains in place and high-quality marquee structures have been put in place to facilitate visitors until the end of 2018. 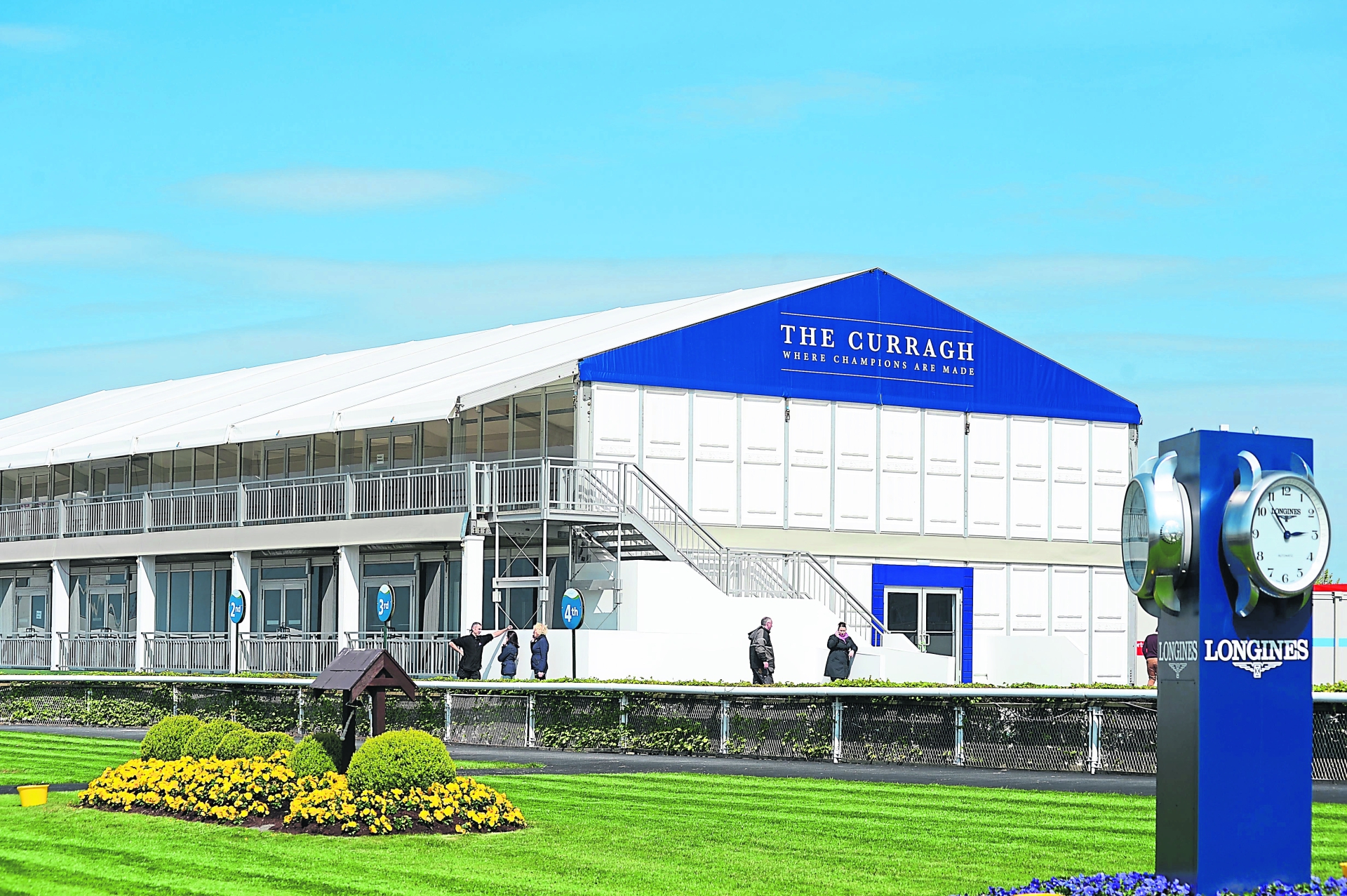 The new two-storey marquee at the Curragh

The structures will feature the Grand Hall with Tote, Paddy Power Betting Shop, Sports Lounge and food and beverage area and an Owners & Trainers facility, together with an imposing Hospitality Marquee over two levels, featuring two restaurants, a Premier Members Lounge and an exclusive area for feature race sponsors.

The Curragh will also feature for this season an artisan food village, featuring some of Kildare’s leading food producers, and a race track viewing stand with a capacity for 1,500. Numerous viewing screens will be located throughout the enclosure.

The Weigh Room has been located to what was previously the main entrance building, while the pre parade and parade ring will remain in place for the 2017 season.

The stable yard has been refurbished and some 70 stables — restored to their “former glory”, in the words of Bernard Caldwell, of the Irish Stable Staff association — and now back in working order. All stable staff involved on a race day this year will be able to enjoy a complimentary meal in the racecourse canteen on all race days on the days they have runners, courtesy of Moyglare Stud.

Derek McGrath, CEO of the Curragh Racecourse, told the Leader: “We have done a lot of work to make sure people will be comfortable and all the services you expect will be there.”

Part of Mr McGrath’s mission is to make flat racing an attractive option for a ‘day out’ to the general public. Shutting down racing at the Curragh for a couple of years would be detrimental to this, he believes.

“It’s smaller but it’s compact, and there will be a nice atmosphere there. I think we’ll surprise people.”

With a capacity of just 6,000, however, it’s a dead cert that the big racing festivals will sell out ahead of time, although tickets are still available at the moment for all meetings. Racegoers are advised to book ahead on www.curragh.ie.