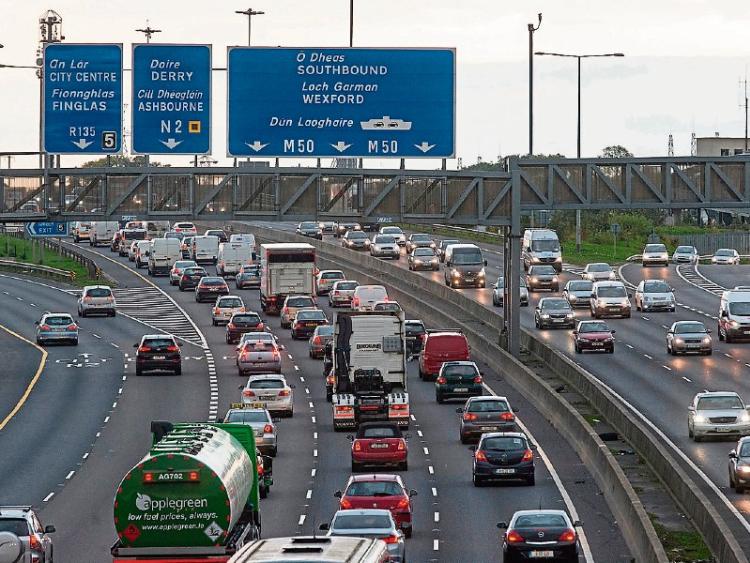 The M50 at peak commuting times

Kildare, by virtue of being beside Dublin, is inevitably going to have a certain degree of residential accomodation which can be described as a commuter belt.

But recently it’s been described as more of a doughnut than a belt, and it’s being blamed on bad regional planning.

In short, it means that fewer and fewer people are living in, or close to the city centre, and more and more people are being sent out to the suburbs and beyond, into the neighbouring county.

This can lead to problems for all concerned.

It reduces the vibrancy in both the city, which is denuded of people living there, and in the doughnut (that’s us) which has a glut of people living here with less of a connection to the area than if they were also working here.

Turning the county into a giant dormitory reduces the standard of life in the county - not least because it pushes up the price of housing in Kildare.

Another major problem is that it puts huge pressure on transport infrastructure, whether that’s public transport such as buses, trains and the Luas, or private cars that require constant investment in good roads.

The employers and business group IBEC are very concerned. They believe the doughnut effect is a major threat to competitiveness in the whole Mid East region, which they identify as being Kildare, Dublin and Wicklow and is the most commercially significant in the country.

In the past few weeks, IBEC published their submission to the National Planning Framework (a successor for the National Spatial Strategy).

Their aspiration for the Mid East region is that it will be “a prosperous city region with diverse economic activity and a world class infrastructure, providing a vibrant and sustainable environment where future generations can live and work”.

However they say that a lack of available affordable and accessible housing in the wider region is a key issue for employers and an obstacle to new business growth.

“Without sustainable housing solutions, the ability to grow business is compromised,” they say (which is as close business people come to being concerned with society than merely the bottom line) - and they call for “affordable and quality housing to buy or rent”.

As regards the ‘Doughnut effect’, they point out that “rising rental costs and property prices are forcing people to commute from the Dublin commuter belt to the city centre on a daily basis. Record numbers are using the M50 with gridlock common at peak times.

“There are concerns regarding the doughnut effect that suburban and outer locations can have on the centre,” they point out.

“Dublin has reached levels that have outgrown its infrastructure capacity.

“Traffic congestion will result in jobs and growth being lost. Increased investment in the transport network is required to keep pace with the growing number of people commuting to the city every day.”

The problem is one of a failure of planning. In fact, according to the latest census figures, there are now more people living in the three counties of Kildare, Meath and Wicklow than there is in Dublin City - and it’s only set to grow in the coming years.

Catherine Murphy, TD, in a submission on behalf of the Social Democrats to the National Planning Framework points out the population of the city centre grew by only 13% between 1996 and 2016, whereas the populations of the Fingal, South Dublin, Kildare, Meath and Wicklow county councils grew by 43%, 22%, 39%, 44% and 28% respectively. Dep Murphy believes that pushing people out of the city created new demands on public services and resulted in a less sustainable approach to development. City facilities were also under-used.

The Social Democrats believe that work needs to be done to bring people back into the city centre - because the current doughnut doesn’t work for anyone.

IBEC wants to see investment in housing, public transport such as an underground DART and completion of a rail connection from the airport to the city centre, and by 2040, an outer orbital road. They also believe, generally, that what they call densification is needed - simply that a greater number of people per kilometre live in the city, and to that end, they wish to see restrictions on the building heights in the city centre relaxed.

They want a concerted effort to make sure the city does not expand beyond the M50 and that congestion reduction measures be implemented. It is, of course, easy to see that easing the ‘doughnut’ effect will require allowing people to live nearer the city centre.

What’s not so clear is the political willingness to tackle and fund what’s needed.