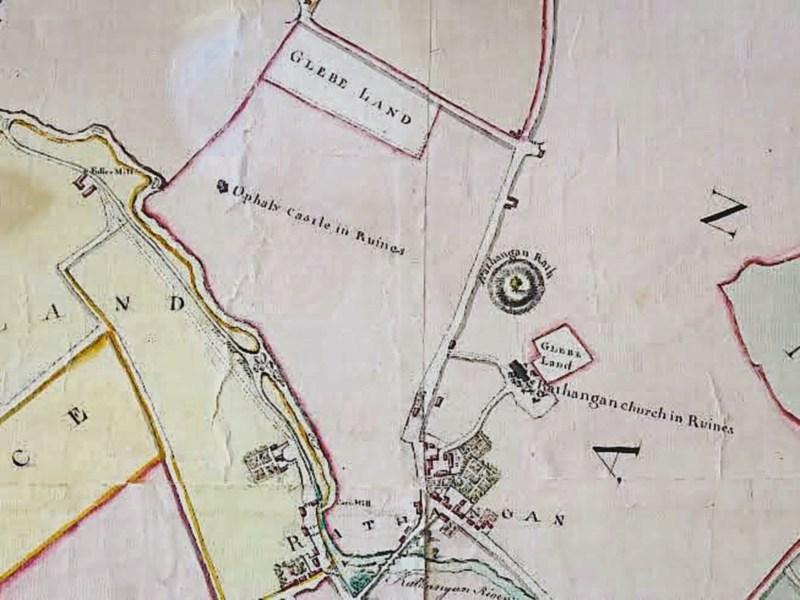 An old map of the site of Rathangan Castle

Plans for 72 houses on the Bracknagh Road, Rathangan have been revised to prevent any impact on Rathangan Lodge.

However, a geophysical survey of the grounds uncovered 25 shards of pottery but no sign of the foundations of Rathangan Castle.

The layout of the development has been altered and an Architectural and Visual Impact statement submitted. Technical details on water drainage and boundary treatments have also been documented.

Jack Kinsella wants to build the housing estate on lands adjacent to Rathangan Lodge, which is a protected structure.

Kildare County Council insisted the developer carry out a magnetic survey to see if there were medieval castle foundations at the site.

Local historian Seamus Kelly has been campaigning for the Rathangan castle foundations to be located and protected.

An archaeological assessment had been submitted by the applicant in relation to Rathangan Castle.

It proposed a conservation architect be hired to monitor topsoil removal and other ground works.

It said if any discoveries are made, work should be stopped in the vicinity until various authorities were consulted.

However, Rathangan historian Mr Kelly, who also worked on the Wood Quay project in Dublin, pointed out the exact location of the castle is not known.

He stressed he had nothing against the project but called for an architectural exploration followed by an excavation prior to building.

“We need to find the structures, preserve them as ruins and put a proper name plaque up and let people go in and see them,” he said.

On foot of the council’s request for a magnetic survey, 20 trenches were dug at the site and 25 pottery shards dating from the 12th to 19th century were discovered.

The Geophysical Survey detected a number of anomalies, some of which were interpreted as being of archaeological potential.

However, the report said that further testing revealed such anomalies were associated with geological variations in the subsoil or associated with modern disturbances or features.

A decision is due from Kildare County Council on April 12.