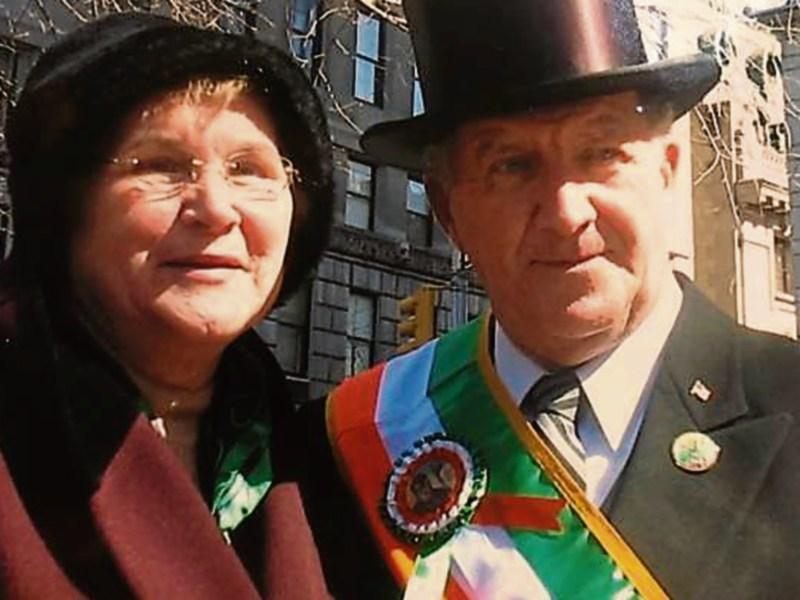 The late Kathleen, and Dermot Sexton

But it will be a bittersweet moment for the Kildare emigrant, who has been awarded the honour to mark his 50th year as a volunteer with the historic parade.

The Nurney native lost his wife of 55 years, Kathleen Garvin Sexton, after a long battle with cancer, on January 17 last.

“I hope I can pull it off,” Mr Sexton said in a statement issued by the Parade organisation today. “I’m praying to Kathleen to help me.”

The Kildare man will blow the whistle at 11am sharp, New York time, this Friday, and the ‘Fighting 69th’, the 69th Infantry Regiment, will start the parade from 44th Street and Fifth Avenue.

More than 100,000 marchers are expected to follow parade up Fifth Avenue.

Mr Sexton, said the organisation, went to New York “on a lark” as a 20-year-old in 1957. He had planned to return to Ireland, but instead, he married Kathleen Garvin, from Carratigue, County Mayo.

In 1967, his brother-in-law, Frank McGreal Sr, brought him to work in the Parade.

“I was running around like a crazy man, it was years before they even knew my name,” he recalled, “but when you work hard, they don’t let you go.”

In 1992, Mr Sexton, who lives in Hawthorne, NY, was given one of the Parade’s most challenging jobs, running the East Side Formation area of the Parade. As Chairman of East Side Formation, he supervises a team of a dozen workers, who are responsible for moving thousands of marchers and hundreds of bands across Madison Avenue, through traffic and onto Fifth Avenue, while trying to avoid “gaps” in the Parade.

“He’s the grand old man,” said Reilly J. Dundon, the Chairman of West Side Formation. “Dermot brings an air of stability to the scene. There isn’t anything he hasn’t seen before, from near-riots in the 1970s, to extremes in weather, like the snow and ice storm that struck mid-Parade in 2003.”

The Parade had been dedicated to the “Heroes of 9/11” and at noon, the entire Parade halted and the 100,000 marchers and two million spectators on Fifth Avenue turned south to face Lower Manhattan, where the World Trade Center’s Twin Towers once stood, and observed two minutes of silence.

“It was unbelievable, how they just stopped New York City and it was so quiet," he said "I felt the hair rise on the back of my neck.”