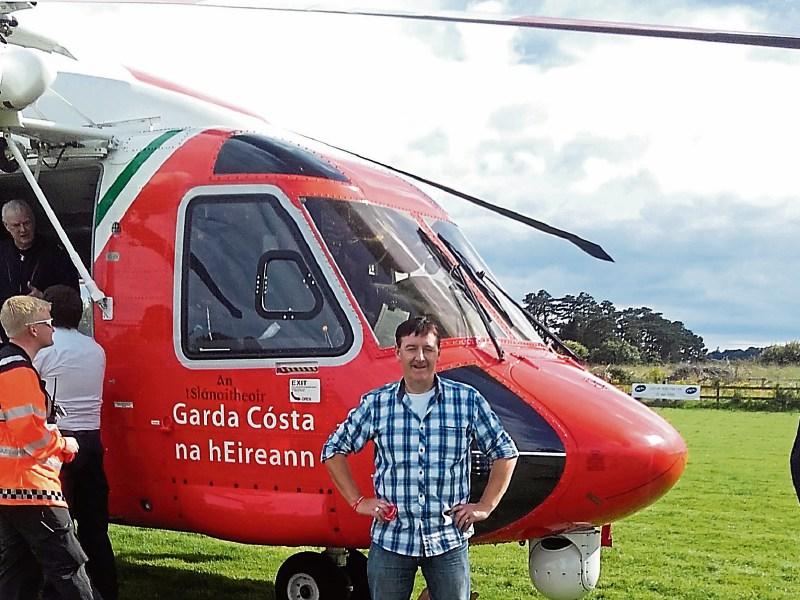 James Brady, from Kill, in front of the helicopter - missing crewman Paul Ormsby can be seen in the top left of the photo

The Irish Coast Guard helicopter which went missing off the west coast of Ireland earlier this week paid a visit to Kill village last year for a family fun day at Kill GAA.

Local man James Brady, who lives at Gaelic View in the village, remembers meeting winchman Paul Ormsby on the day. Mr Ormsby tragically lost his life, along with Ciaran Smith, Mark Duffy and Captain Dara Fitzpatrick, when Rescue 116 crashed off the Mayo coast last Tuesday morning. Captain Fitzpatrick was also present in Kill on the day.

Mr Brady said many local people in the area came out to see the Sikorsky S92 rescue helicopter.

“The crew members were very active around the helicopter, and allowed children in around the doorway,” he said.

Mr Brady also captured some footage of the ill-fated helicopter taking off over Kill and departing back towards Dublin.

“It is very sad and hard to believe,” he said.

The Coast Guard helicopter has been a frequent visitor to events in Kill GAA over the past couple of years, due to the connections of a coast guard crew member living locally.