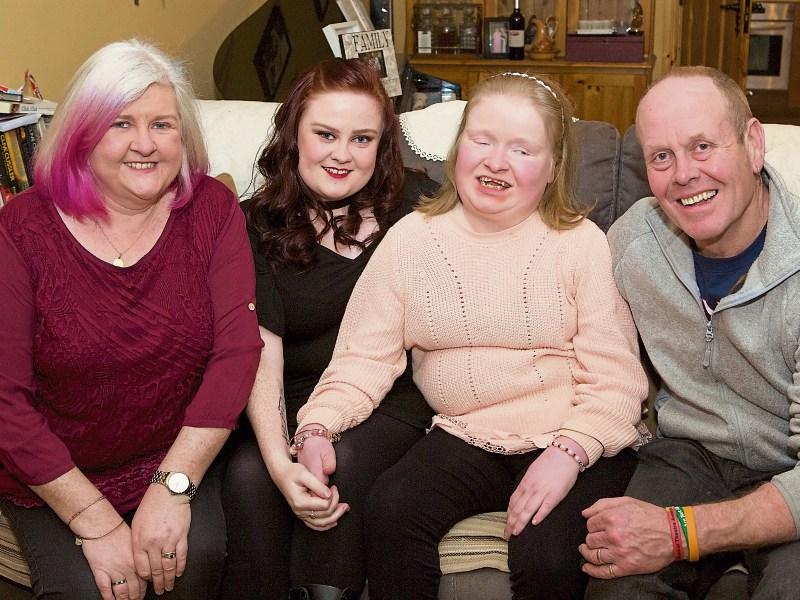 Twenty one year old Colleen O’Kelly is this week looking ahead to a medical appointment which will lead to long awaited corrective surgery on her spine.

Colleen uses a wheelchair and has Joubert Syndrome, a genetic disorder, and has the intellectual development of a three-year-old.

Colleen had a kidney transplant operation in 2010 having suffered renal failure at 13 years of age followed by two and half years of dialysis.

Her mother Tina took to the airwaves last week to tell of her wait for scoliosis surgery.

The delay in tackling surgical waiting lists generally has meant that many people have had scoliosis surgery delayed — and their condition generally deteriorates.

Tina told the Leader she now has an appointment for her daughter in Tallaght Hospital on March 7.

“Right now I don’t know if it will be to undertake x-rays or if I will come away with a date for surgery.

“This is great news and it will be great if the operation is done in March or even April,” Tina said.

She added she was wary of using her daughter’s plight (apart from the delay, she has special needs) to try to push her up the waiting list.

“It’s difficult for the doctors who know the operations need to be done to have to try and play God and decide who should be first when all of the patients need surgery,” added Tina.

She had been vomiting for nine days and this could have had ramifications for the kidney transplant.

Moreover she was initially treated at the children’s Hospital.

But once she turned 18, she was transferred to Tallaght Hospital, she was put on a new waiting list.

“The situation was that her doctor in Crumlin Hospital had to write a letter to himself in Tallaght Hospital because he works in both. This is the kind of bureaucracy that happens within the health service.”

Her spine is a 97% curve meaning it is lying on one of her lungs leaving her predisposed to the risk of pneumonia, recurring chest infections or a collapsed lung.

“Colleen was not expected to live beyond a year or so but celebrated her 21st birthday with a party at the Town House Hotel five months ago.

Tina is married to Bob and they have another daughter Amy. A son, Joshua, sadly passed away as a result of Joubert Syndrome.