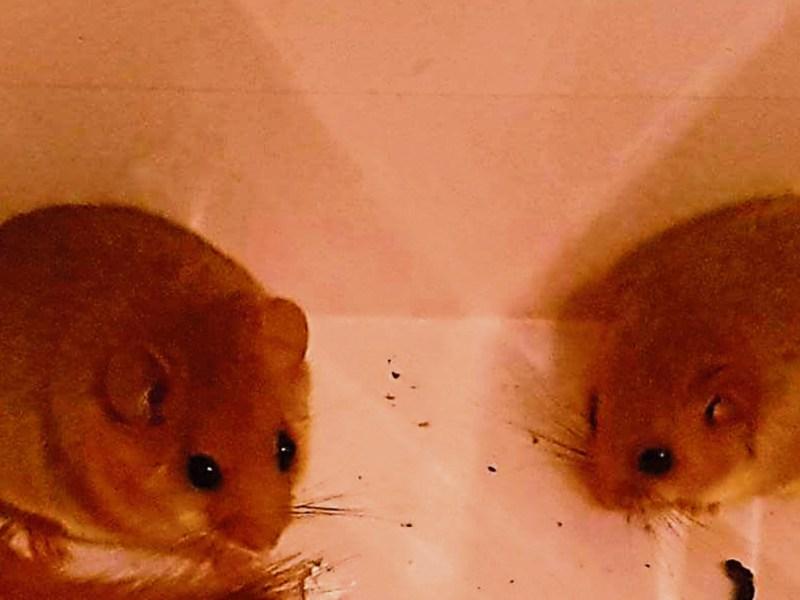 The duo were found by Fred Daly on Friday afternoon as he was cleaning out a shed.

He lifted up a box and the two mice fell out.

Fred knew what he was dealing with as he previously found a dormouse in his garage.

He contacted Kildare Animal Foundation, whose volunteers collected the rare mice on Saturday night. They are currently being cared for by a member of the Kildare Dormouse Group, according to Dan Donoher of KAF, and will be released back in Ballymore Eustace when the weather gets warmer. Dormice usually hibernate over the winter months, so these two were likely disturbed in their slumber.

The Foundation’s Wildlife Unit currently houses six dormice. “We don’t want to add to that population,” said Dan. He said that the dormice found in Ballymore Eustace were relatively young and probably siblings.

Dormice are relatively rare in Ireland and the UK, but the mid-Kildare area seems to be a breeding hotspot for the tiny creatures. Several of the creatures have been found since 2013.

It is not known for sure how they came to inhabit the Lilywhite county, but it is speculated they could have been unwitting passengers on imported horsebox hay.

However, cute and all as the furry rodents are, Dan sounded a note of caution to anyone who comes across one in their garden.

“Please do not attempt to keep it yourself, but contact us here at the Foundation,” he said. “These are wild animals and need specialist care.”