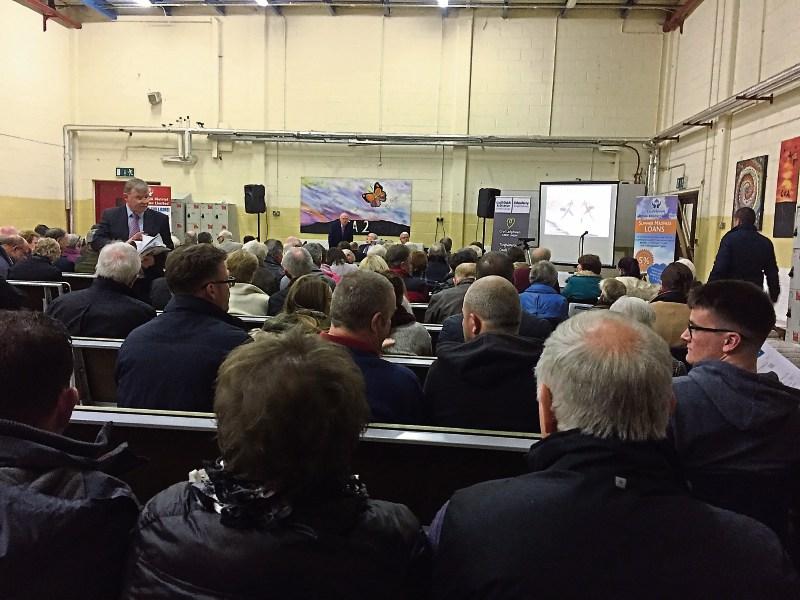 The AGM of Coill Dubh Credit Union approved, by an overwhelming majority, to amalgamate with the neighbouring Edenderry Credit Union.

The AGM was held on Friday evening last in St Farnan’s school in Prosperous and saw more than 200 people attending.

The move to amalgamate the two credit unions began at last year’s AGM when the members gave the board the go ahead to explore the idea.

At the 2016 AGM on Friday, the secretary of the credit union Eammon O’Farrell, outlined the rationale behind the proposal.

He said it would allow for greater loan types, greater services to members and ensured the future of the credit union.

He noted also that investment income was falling all the time and that an amalgamation would help in that regard.

He said also that it would ensure growth and security of savings.

He said that in the immediate term, members of the credit union could expect no changes to offices or staff.

The biggest difference will be a name change — to Croí Laighean, meaning ‘Heart of Leinster’.

Voices of concern included those who felt that they weren’t adequately informed of the proposal.

The Board responded that while they were waiting for Central Bank approval (which they got) they could not publicise it.

In the end the special resolution to join the two credit unions passed by 83%, with 174 votes out of 208 in favour.

Credit Union stalwart Johnny Callaghan told the Leinster Leader that he would be writing to the Central Bank to raise issues around the manner in which the resolution was handled.

While he acknowledged the amalgamation might ultimately be the right move, he was concerned about the process of agreeing it, saying it was badly handled from the start.