South Kildare shoebox donations up by 16% 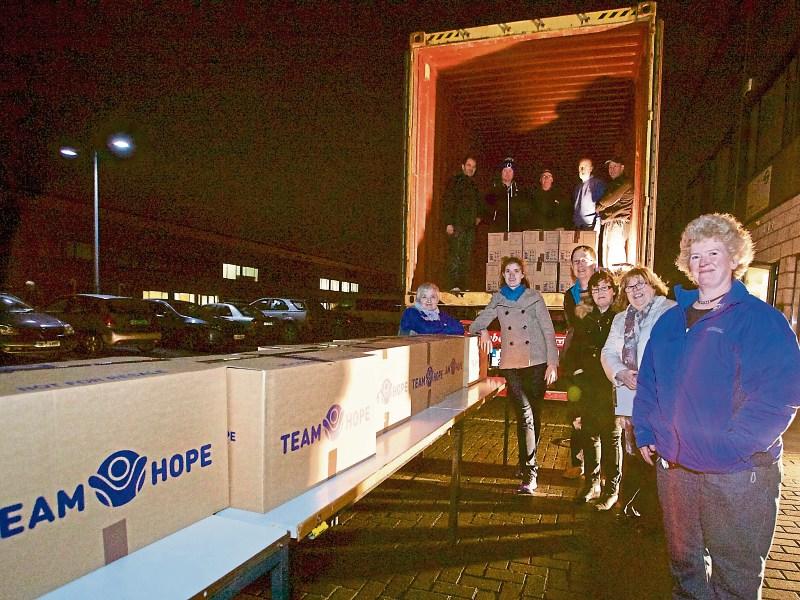 Over 8,500 shoeboxes full of Christmas joy made their way to Lesotho and Eastern Europe from South Kildare recently.

Organised by charity, Team Hope, the lorry was loaded by the volunteers at Ladytown Business Park after boxes flooded in from all over the county including Naas, Clane, Sallins and Newbridge, all the way down to Athy.

“It was amazing. We had a great response,” said Breda Healy, schools co-ordinator.

Last year, some 7,290 shoeboxes were checked, packed into cartons, and filled a 40ft container to capacity to be shipped to Eastern Europe from a depot in Newbridge. Last Tuesday December 6, 8,500 were loaded up, with around 7,500 being shipped to Lesotho and the remainder delivered to Eastern Europe.

This work was done by a small team of up to 25 dedicated volunteers. Some have been involved for many years including Anne O'Donnell, Michelle Chambers, and Dorrie Dempsey lead by co-ordinator Brendan McKenna. Breda thanked all who helped this year's appeal including Rob Walsh of Ladytown Business Park, who donated the use of the unit. She also thanked those who provided collection points and the various schools who took part. She pointed out the great joy the children in these poorer countries get when the shoeboxes arrive.