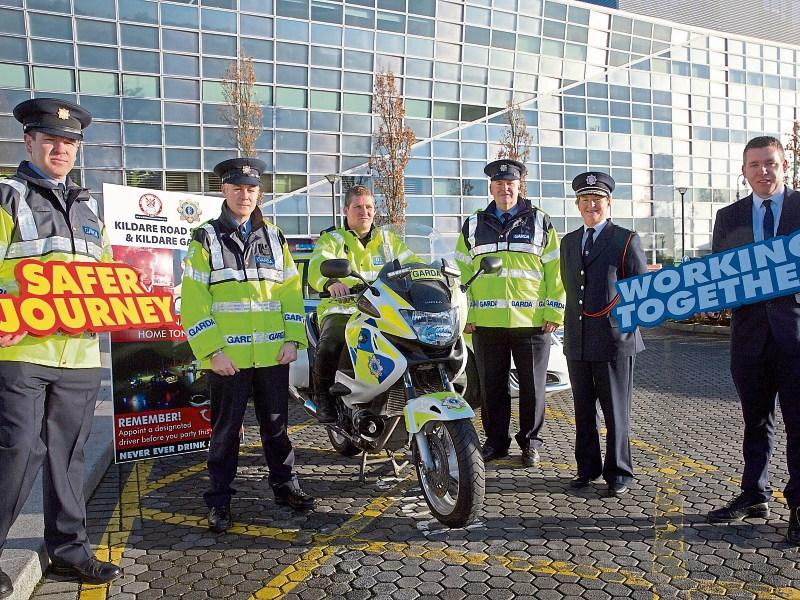 Kildare gardai will operate more checkpoints this year than ever before in the bid to combat drink driving — and drug driving.

There will be in the a total of 1,800 “enforcement actions” operated by the gardai seeking out people driving under the influence of alcohol or drugs, or 30 a day.

Inspector Oliver Henry of the Garda Traffic Corps said every part of County Kildare will be targeted by the gardai and he added “we will be doing more checkpoints in the morning.”

He added: “We apologise for any inconvenience that may be caused. There can be delays at checkpoints but it’s for a good reason.” Garda representative as well as Fire Service, Civil Defence and Kildare County Council attended the recent launch of the Christmas road safety campaign in Aras Chill Dara.

Coill Dubh man Jake Byrne, a motor racing driver who is Motorsport Ireland’s Young Driver of the Year is the an “ambassador” for the campaign locally.

He was in the UK for the launch represented by Leo Nulty an event and PR Manager, who is also known for his role as commentator at the Mondello Park motor racing track.

“We all have to be aware that when we drive we are in control of something that weighs a tonne and moves at speed,” Mr Nulty said.

Mayor of Kildare Ivan Keatley said it is encouraging to venues like pubs and hotels participating in the campaign. “I know that for many young people drink driving is not an issue because they don’t do it but it’s more likely that somebody of my own generation or older may take a chance — but it’s not worth taking,” said Cllr Keatley.

High visibility jackets as well as leaflets, posters, car stickers and key rings will be distributed as part of the campaign.

KCC’s Road Safety Officer Declan Keogh said that so far this year seven people have died in road accidents in County Kildare — one less than in all of 2015. But the number of arrests of suspected drink drivers is 298 or 33 more than for all of 2015.