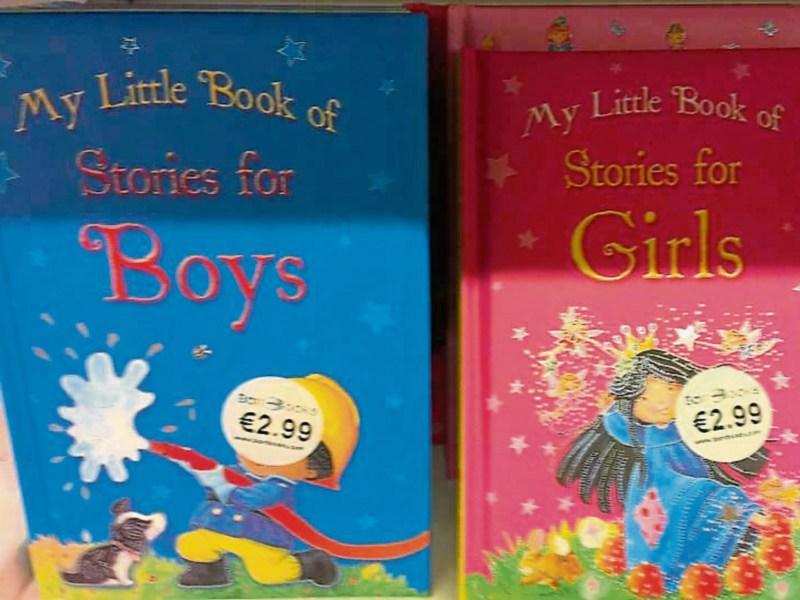 Should some stories be for boys and some for girls?

A couple of weeks ago, in a Kildare supermarket, I was looking for some bubblegum reading — you know, the kind of five quid crime thriller or light, funny novel that wipes a tough work week from your brain.

You see where I’m going with this.

I’ve no kids of my own but I have a niece. She’s obsessed with Spiderman and superheroes and multicoloured bobbins for her hair and bright tights and Duplo and dressing up. We recently braved the traffic and took her to the Frozen Disney on Ice at Citywest, where she delightedly pranced around with hundreds of other little girls in a long, flowery Anna costume, tunelessly belting out Let It Goooooooooo.

Also this autumn, she has been clad mostly in a Batman hoodie, complete with ears and fins, and a Spiderman hat. Both were sourced, coincidentally, by her auntie in the ‘boys’ clothing section of that very same supermarket, because I knew they would light up her little face.

Some days she refuses to answer to her own name and instead insists on being called ‘Batman’. One day I called in to see her and she was running around in a superhero tee-shirt, with a Cinderella dress over it, yelling out ‘I’m Princess Batman, goys!” (We also fear she’s picking up some Ross O’Carroll Kelly speak from somewhere).

She’s three. She’s just starting to learn about genders. She’s starting to self-identify as a ‘little girl’. Still, about half the time she calls herself ‘a puppy’ and does nothing but bark — thanks, Paw Patrol.

Would I buy her a book called Stories for Girls? Would I hell. I’d rather stick pins into my own eyes. She doesn’t know that a girl, by popular culture’s gender definition, should still mainly like princesses, not firefighters and vets.

It’s fine that princess books and stories exist, just as it’s grand that tales featuring firemen, and tractors do too.

Still, I’m not over worried my girl will ever get ostracised for playing with both sets of toys. It’s the little boy in her class who might face bullying for doing the same who I’m scared for. If he wants to love pink and fairies as well as superheroes and Lego, is that okay with us yet?

I’m prepared to get slaughtered for “overthinking” these cheap, throway books, for being just another Feminazi trying to put subtexts on to what small children play with.

Maybe I was oversensitive that day in that supermarket. I did see those books three days after a qualified, experienced woman was beaten out for a top job by a misogynistic, pussy-grabbing chauvinist.

Should I have taken a beat, tried to laugh it off as ‘one of those things’?

But every little laughed-off, tolerated slight has consequences. We learned that last week.But sure, if we don’t mind what we teach kids at the start of their lives, why be surprised about where it all ends up?