No to pylons and wind farms 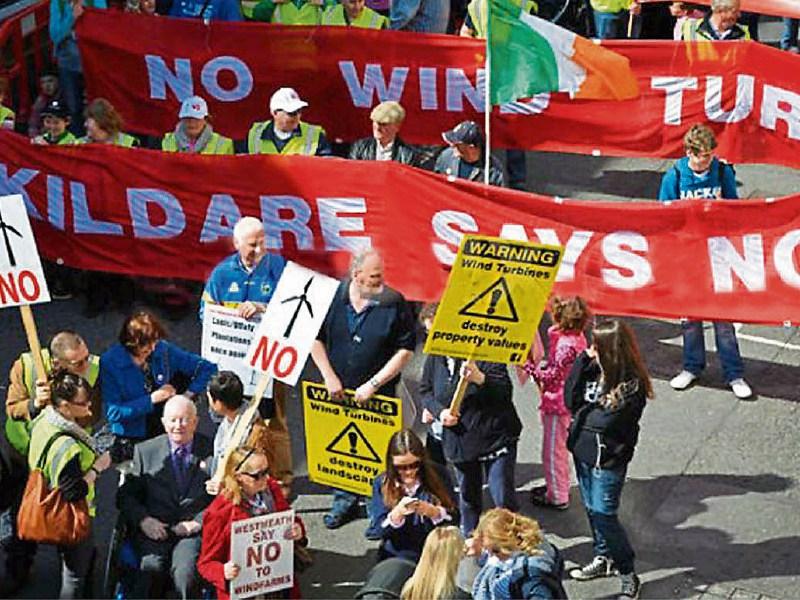 Some Kildare protestors at a previous protest in Dublin

Representatives from counties all over Ireland including Kildare will be protesting outside Dáil Éireann tomorrow at 12 noon to outline their opposition to the government’s energy policies.

Kildare Environmental Action Group (KEAG) said the aim is “to give a strong message to our TDs that the people of rural Ireland have had enough of the government's current flawed energy policy which is littering rural Ireland with industrial wind turbines.”

The protest against industrial wind farms and pylons will run until 2pm. KEAG previously objected to Element Power’s plans to build a 47 turbine wind farm in Kildare. It welcomed an Bord Pleanála’s recent decision to turn down planning permission for the development.

Spokesperson, Paula Byrne said ‘‘This protest is to remind our public representatives, the government, the DCCAE and the rest of the elite driving this policy that we haven’t gone away.”

“The current wind-power strategy is a failed environmental, political and economic experiment. It is not unique for an Irish administration to implement policies without analysis but the on-going ‘back of an envelope’ strategy is utterly unacceptable. To date the 1400 turbines, built in the teeth of community resistance, has saved about 3% of our overall CO2 emissions. This policy is an abysmal failure as it fails to do what it was set up to do.”

She continued; “Worse still the attempt to impose this policy on rural Ireland has tarnished and damaged the issue of climate change. We are also demonstrating because of the on-going neglect of communities by their public representatives on this issue. Communities have been forced to fight industrial wind farm developers by themselves at great financial and emotional cost.”

She said the group also intended “to challenge the hypocrisy of politicians who make comforting noises to their constituents regarding individual local projects and accept the self same policies once they reach the sanctuary of the Dáil. People are no longer fooled by politicians who act like Mighty Mouse in the constituency and Mickey Mouse in the Dail.”