Lynne Marie is crowned Kildare carer of the year 2016

Nominated by her son 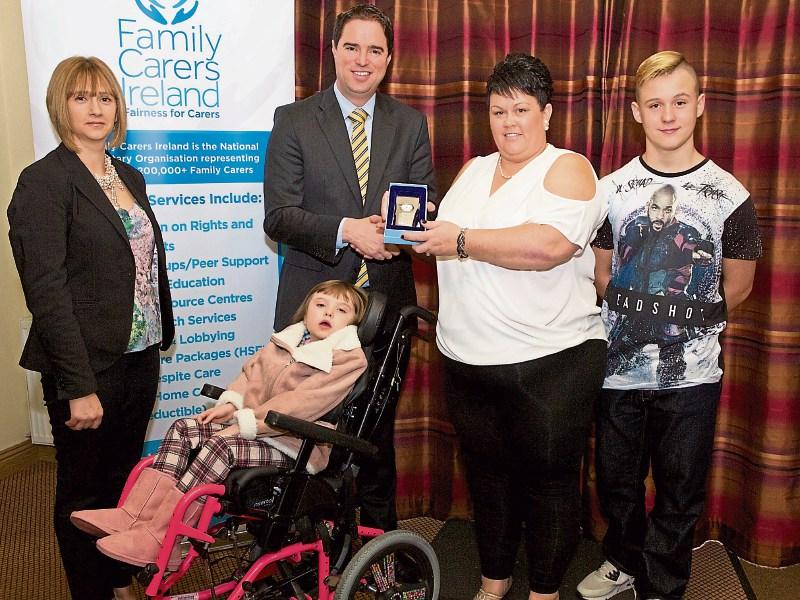 A Newbrige mum has been crowned the Kildare Carer of the Year 2016 after she was nominated by her son, Elliot (12) for the love and care she provides to her daughter Jessica, who has Rett Syndrome.

The award was presented to Lynne Marie Walsh by Deputy Martin Heydon at a special ceremony held in her honour at Ryston Sports and Social Club on Thursday, November 3.

Because of her disorder, Jessica is unable to walk or talk and relies on Lynne Marie to do everything for her.

The determined mum gave up her job in order to be with Jessica at all times.

Elliott described how much love Lynne Marie gives to him and his sister, and said he was nominating her as he wanted to make his mum smile.

Kellie Ann O’Brien, FCI Kildare Carers Support Officer said, “We are absolutely delighted that Lynne Marie Walsh has been awarded Kildare Carer of the Year 2016. Lynne Marie is a truly remarkable person, who provides much love and care to her daughter Jessica who has Rett Syndrome. Lynne Marie’s son, Elliott nominated her, and gave a very honest account of how much his Mum does for him and for Jessica, and as Elliott said, she really is one in a million.”

“As well as caring for her family, Lynne Marie regularly holds fundraisers to raise much needed funds and drive awareness of Rett Syndrome”

Ms O’Brien added, “Carers play an absolutely vital role in society, and they are at times the forgotten workforce. The Carers of the Year Awards, present an opportunity to celebrate the dedication and support carers provide to their loved ones every day throughout the year.”

Lynne Marie will now attend a special ceremony in Dublin on November 16 honouring award recipients from across the country. One family carer will be chosen as Ireland’s Carer of the Year 2016.