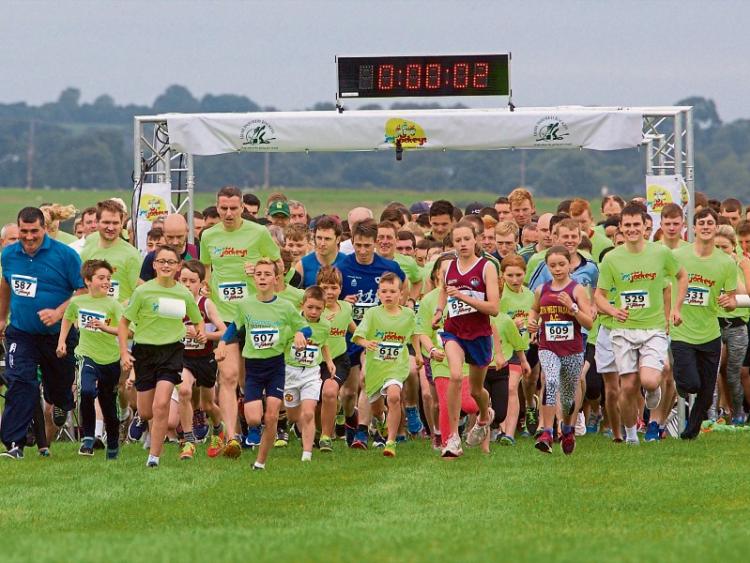 They’re Off’ in the 5k ‘Jog for Jockeys’ 2016 at the Curragh racecourse, last Sunday morning, August 21. Photo: Tony Keane.

A programme dedicated to the Kildare-based Irish Injured Jockeys organisation will be aired on RTE’s Nationwide tonight, Wednesday, November 2, at 7pm, and viewers will get a chance to see first-hand what the charity does and the people it helps.

The programme features interviews with injured jockeys including Irish National Stud employee Robbie McNamara and really gives people an insight into the lives of people who have been badly hurt as a result of a riding accident.

Sadly, Robbie’s professional career as a jockey was also short lived, as he suffered a career ending fall in April of 2015 at Wexford.

There is also action from one of the Irish Injured Jockey’s fundraisers, Jog for Jockeys.

This run was held at the Curragh Racecourse back in August and shows the hundreds of people who lined out on the track to support Irish Injured Jockeys.

Other people the programme caught up with include Irish Injured Jockeys chairman, Ruby Walsh and the General Manager of the charity, Michael Higgins.

The Corinthian Challenge fundraiser has raised over €120,000 for Irish Injured Jockeys and people can still donate.

Irish Injured Jockeys was set up in 2014 to provide financial support to jockeys and their families who have suffered a result of a racing accident.