Patrick Monahan from Caragh with his trophy after winning the Wheelchair race during the SSE Airtricity Dublin Marathon last Sunday. Photo: Stephen McCarthy/Sportsfile

Athlete Patrick 'Pa' Monahan is to be recognised with a standalone award at this year’s REHAB Kildare Person of the Year banquet.

The Caragh man will be presented with an ‘Inspirational Award’ at the Gala Ball in the Keadeen Hotel, Newbridge, next Friday night, November 4.

The awards are generously sponsored by Kildare County Council. MC and Awards Co-ordinator Matt Browne said the Council this year wanted to ensure every award finalist was recognised in their own right, with one award winner to be named as Kildare’s overall title holder at the end of the night.

“However, the former Raheens player’s story had touched and impressed so many people that we felt this merited a standalone award,” said Matt.

“How Pa recovered from a serious motor accident, changed and re-built a new career before making a return to sport, captured the hearts of Kildare people. It was the London Olympics in 2012 that inspired Pa to take up wheelchair-racing.

“His determination, competitive streak and sheer resilience saw him finish third in his first attempt at the Dublin City Marathon in October 2013. After that, he went on to win the Belfast Marathon, then the the Dublin Marathons in 2014 and 2015. Man on wheels, with nerves of steel!”

This year, Pa represented Ireland at the Paralympics in RIO and despite contracting a virus in the Brazilian Olympic campus, he still managed to compete in the wheelchair marathon and finish in the first 20. The much-loved Michael Fitzpatrick, TD will be honoured with a posthumous award on the night, the adopted Cavan man having given so much to his local community and indeed, to the wide population of Co Kildare before his untimely death from Motor Neurone Disease.

Nine candidates will each receive their awards on the night with a special commemorative brochure sponsored by Naas Printing Ltd and a video citing their work compiled by Finbarr Sheehy of Business Excellence. 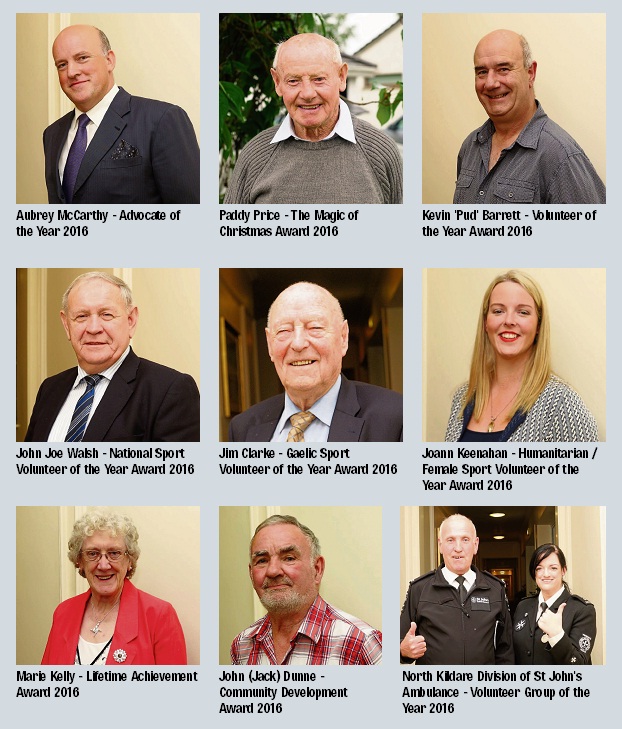 Dave Maher was the last Kildare title holder in 2014, with no awards held since as founder members Seamus Morahan and Vincent Kelly resigned to encourage new blood onto the committee.

Matt, Edel and PRO, Rose Barrett O’Donoghue wish to acknowledge the ongoing sponsorship of Joe Mallon Motors, Naas Printing, Business Excellence, the Keadeen Hotel and Lily O’Brien’s and to thank the local media for their generous coverage and support.