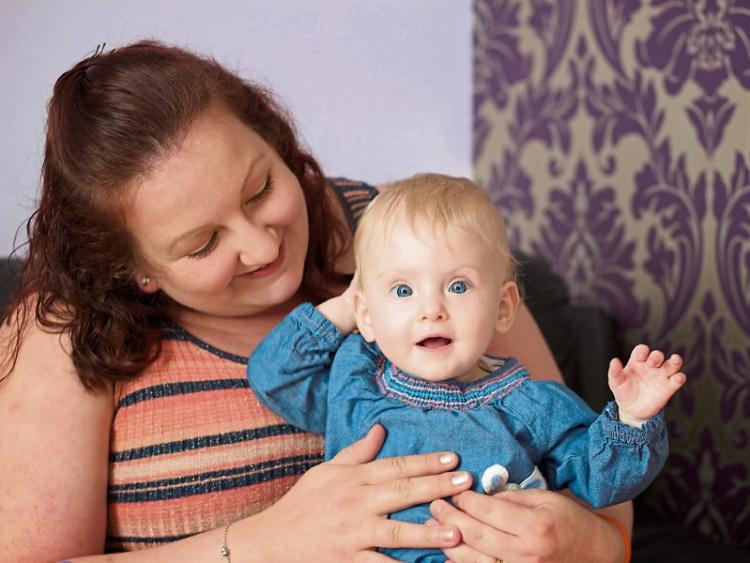 A Kildare mum has shared her experiences to raise awareness and understanding of Spina Bifida and Hydrocephalus.

The family of eight-month-old Alyssya Reeves has taken this step to mark today as World Spina Bifida and Hydrocephalus Day.

When Alyssa’s mum, Amanda received the diagnosis at 20 weeks pregnant that her baby girl, would have these conditions, she cried her eyes out for days.

Amanda and her husband Keith had been trying to become parents for four years.

“I had done everything right. I had followed all the medical advice. I was even taking Folic acid for the four years I was trying to get pregnant — I really hate it when people ask me was I not taking folic acid,” she said.

Once the shock wore off, Amanda's strong coping skills kicked in.

“I really believe that knowledge is power. There are a lot of big medical words used and when the doctors say them, if you do not know them, they throw you. When you understand the words, it is not as scary,” said Amanda.

“I tried to find out as much as I could; I got in touch with SBHI’s Family Support Team and I joined the Parents’ group on Facebook and got great support from them,” said Amanda.

“Having the diagnosis beforehand was very good as it allowed me time. Some parents of Spina Bifida and/or Hydrocephalus babies who only find out after the birth, find it a little bit harder,” she said.

She said her husband Keith, mum, Divina and sister, Jennifer have been a huge support as well as the Facebook page, SBHI, and the Kildare branch.

Alyssa arrived eight-and-a-half months ago, by emergency section in the Rotunda Hospital. She was born at 5.30pm and by 8.30pm she was in Temple Street Hospital and had her spinal closure surgery the following day. At eight weeks, Alyssa had to have shunt surgery.

“I do worry about things like will she walk? Then if she walks, will she break bones? Will she be bullied? The shunt is another worry because at any point it could go,” she said.

However, Amanda’s positive outlook means she is envisioning a future where Alyssa has no serious health problems and attends a mainstream school.

The aim of World Spina Bifida and Hydrocephalus Day is to raise awareness and understanding, and to advocate and promote the rights of persons with these conditions.

SBHI is celebrating Spina Bifida and Hydrocephalus awareness, not just for one day, but for a whole week with the initiative #WhatsYourStory?

For each of the seven days (Monday to Sunday, October 24 to 30), SBHI will publish a member’s story on its website – www.sbhi.ie/aw2016

The Reeve's family is one of the stories that the SBHI has shared.