Michael Fitzpatrick passed away in 2011 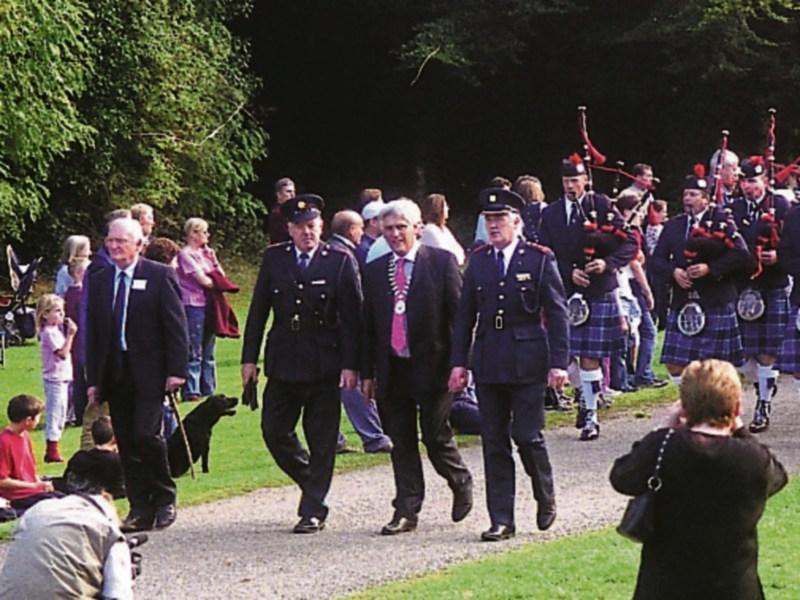 The late Michael Fitzpatrick, centre, during his term as Kildare Mayor in 2003, accompanying the New York Fire and Police department representatives at the unveiling of Donadea's 9/11 memorial park

A posthumous award at this year’s Rehab Kildare People of the Year awards will be dedicated to the late Michael Fitzpatrick, a former Garda, county councillor and TD for North Kildare who died sadly of Motor Neurone Disease in 2011, aged just 69 years.

Even in his final months, Michael used his illness and political persona to highlight and fundraise for research and support services of Motor Neurone Disease.

“Michael was always a huge supporter of these Kildare awards, long before he was elected as a TD. He supported our endeavours, donated generously and gave of his time whenever he was asked. He was, always will be, remembered as a gentleman,” said the organising committee.

Combined with his auctioneering business, his involvement in local politics commenced, under the direction of Charlie Weld, Paddy Power, and Charlie McCreevy.

He began for Fianna Fáil at Cumann level, Clane and Kildare Comhairle Ceantairs, Director of Elections (Local, National, County and European Elections in Leinster), and was finally selected to the National Executive in 1991.

Politics became his career in 1992 when Charlie McCreevy, as Minister, Social Welfare, Tourism & Trade, and Finance through three successive Governments, appointed Michael as his constituency advisor.

In the aftermath of the fall of Fianna Fail government in 1994, as Charlie was no longer a minister, all his staff were no longer in employment.

Michael continued to work every day for over two years in voluntarily capacity dealing with the concerns of the people of Kildare.

In June 1999 Michael won a seat convincingly on Kildare County Council and served as Mayor of Kildare in 2003/2004.

He set himself a simple mission statement ‘to make Kildare the first choice as a place to live, work visit and do business’.

In October 2004 following Charlie McCreevy's appointment as EU Commissioner, Michael failed to secure the nomination at convention for the by-election.

In 2007 he was one of the selected candidates for Kildare North, the only constituency in the country without a Fianna Fáil TD.

On June 14 2007 he took his seat in the 30th Dail, and saw it as not merely the pinnacle of his political career but an absolute honour bestowed upon him by the constituents of Kildare North.

Michael was diagnosed with Motor Neurone Disease in 2010, but fought the following year's general election despite his progressing illness. His seat was one of the casualties of the seismic shift in public opinion against Fianna Fáil that year.

Some 10 community volunteers and groups have been nominated for Rehab Kildare People of the Year awards 2016.

The awards night will be held on Friday, November 4, at the Keadeen Hotel in Newbridge.