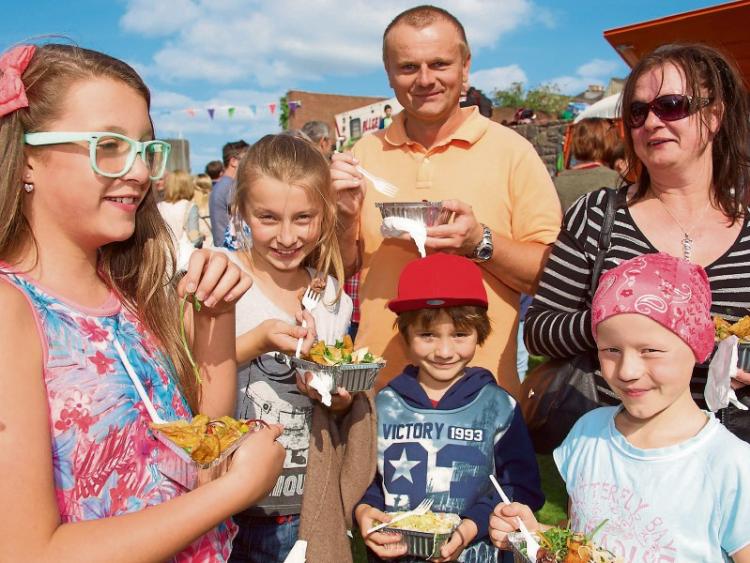 Up to 4,000 people are likely to attend the Naas Wild Food Festival, which takes place at the Grand Canal Harbour, adjacent to the library on Saturday, September 10.

It runs from noon to 5pm and will offering the community food, entertainment and fun.

The event, now in its third year, is organised by Naas Tidy Towns and it exists to showcase the locally produced food, restaurants and other businesses.

Gerry Kehoe of NTT told The Leader that 3,000 people attended the 2015 event, which took place at The Well, just off Newbridge road.

It is hoped that the event will stimulate business in the town and as well as increasing tourism.

“Over time the festival will could attract thousands of visitors, from both home and abroad bring economic benefits to Naas.

The idea is that people will open stalls on the day selling what be described as normal food but they just also sell something wild. “It should be fun, quirky or unusual and the list of wild food is endless,” said Mr Kehoe.

Expect to be tempted by an array of foods including a spit roasted meat, garlic Irish snails, venison, hare, Rocky Mountain oysters ( a dish made from sheeps testicles), locally produced cheese, insects on toast, fried grasshopper, grubs, wild boar, goat, rabbit, seagull razor clams and African babotie - a dish of spiced minced meat with an egg topping, and much more besides.

NTT came up with the idea of the festival because it wanted to stage something that was unique, focusing on rare and unusual foods from both the immediate locality as well as distant lands.

An invitation has been issued to businesses, community groups , clubs and individuals to get involved in the event by setting up a stall and selling food or drink.

The community stalls are set up by voluntary and not for profit groups using voluntary about for fundraising.

Individuals and families will run stall as will businesses which set up commercial stalls prompting their business in that way.

The food provided is relatively inexpensive and most items sell at $3.

“The idea is to make it possible to sample many items at little cost,” added Mr Kehoe.

In the longer term it's hoped the festival will replicate the success of a Hokitika Wild Food Festival in New Zealand.

That town has a population of 3,500 and the festival there has been running for about 20 years and attracts 15,000 people annually.