Irish Champions Weekend at the Curragh 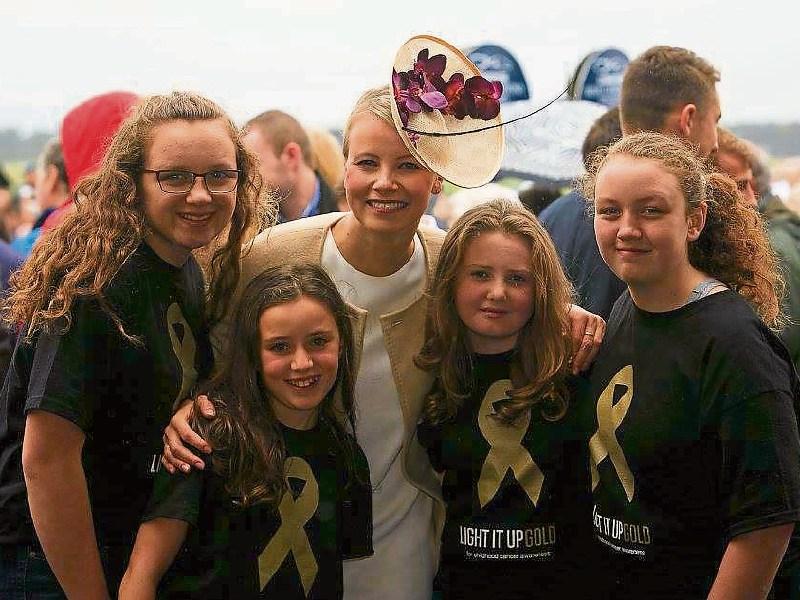 Light It Up Gold campaigners

A number of gold themed initiatives will take place at the Curragh on Sunday, September 11 as part of the Light it Up Gold campaign to support childhood cancer awareness.

According to organiser Mary Claire Rennick, this is the Curragh’s third year to support the campaign, which will even see all the jockeys taking part in the Longines Irish Champions Weekend raceday donning gold ribbons on their boots.

“We are a charity that was set up and is run by parents of children with cancer to raise awareness of childhood cancer,” said Mary Claire.

“This is the third year promoting the campaign at the Curragh so we run a charity bet and a charity lunch and you can even buy a gold ribbon from our stall. It is really nice, even the jockeys will wear them all on the day on their boots.”

Many local buildings around Kildare will be lit up gold, including the Kildare Village.

A number of gold-themed initiatives will take place at the Curragh next Sunday during the day. The children representing the charity will accompany the jockeys to the parade ring for the Palmerstown House Estate Irish St Leger.

In Ireland, there are currently 200 new cases of childhood cancer each year, and this number is growing. During September, the campaign will join with all other groups worldwide to raise awareness of Childhood Cancer.

“We run the Light It Up Gold Campaign for childhood cancer awareness each September — as is part of a worldwide campaign which started in the US in 2013 which sees buildings and famous landmarks in the US, Canada, The UK,, Australia and elsewhere light up in gold lighting to raise awareness of childhood cancer,” she added.

“This September will see Belfast City Hall, Trim Castle, Shannon Airport, St Patrick’s Cathedral and many other buildings shine gold. We hold candlelit vigil walks around the country to recognise the bravery of children in treatment for cancer, honour the survivors and to remember all the children whose young lives have been tragically taken by this disease.”

The charity funds the internationally recognised arts in medicine programme, Beads of Courage on St John’s Paediatric Cancer Ward at Our Lady’s Children’s Hospital Crumlin and Play Services on the busy Day Unit.

The Charity also funds a medical research project in conjunction with UCD School of Nursing and St John’s Ward.

They advocate for improved supports and services for children with cancer in the new National Cancer Strategy 2016 to 2025 and are working with The Irish Cancer Society to develop a Parent Peer To Peer Support Network.

You can learn more about thieir work and projects at www.childhoodcancer.ie and follow them on www.facebook.com/lightitupgold.