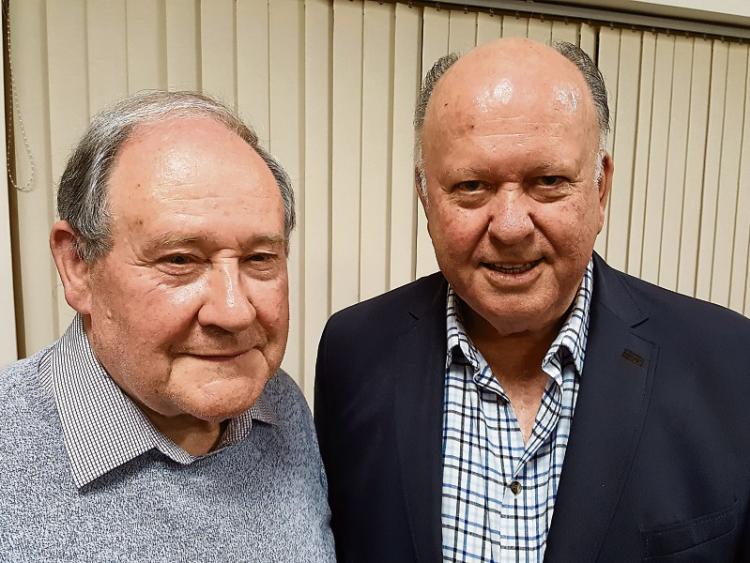 Brendan Cullen and Pat Given, who gave talks during Heritage Week on Clane's local history

The first students at Clongowes Wood College in Clane had a much stronger official link with alcoholic beverages than their modern peers, it would seem.

That was one of the points to stand out from a Heritage Week talk by former teacher at the school, Brendan Cullen.

Mr Cullen, a member of the local history group, spoke to a gathering at Clane library about the years from its foundation in 1814 to 1840.

At the outset, Pat Given, who had spoken about the Franciscan Friary in the town on the previous Saturday, said they were thinking of the late John Noonan, a keen local historian and had worked well with Brendan Cullen, in particular.

Mr Cullen noted that students spent 11 months of the year based in the boarding school, taking one month’s holiday, which came in August.

You could not call the school drink-sodden but what stood out was an attitude to alcohol which contrasted greatly with the attitude to drinking today.

While school records do not record deaths from illness, Mr Cullen believes that a number of deaths came about in the first years of the school as a result of a typhus outbreak but that news of them was suppressed.

In 1819, the school closed for six months as a result.

Mr Cullen said that the fact that most students came from Dublin and were boarders was as true today as it was at that time.

A man called Peter Daly sent his son to Clongowes for its religion and good education.

Mr Daly ran coffee plantations in Jamaica, which were worked by slaves.

There were 131 slaves and when slavery was officially abolished, he was compensated by the British government by £2,318, a large sum at the time.

When his son was ill, Mr Daly asked the Jesuits to provide him alcohol, including expensive claret, as a medicine.

Daniel O’Connell, known as The Liberator, sent his son, Danny, to the college.

Danny’s mother, Mary, wrote regularly to her son, worrying about his welfare and thought that some of students were “vulgar.”

Whatever his personal drinking habits, the Liberator’s son, then 15 years old, was a partner in a brewing company based near the current Guinness plant at St James Gate.

At the school by times, trust in local water sources was not great.

As a result a small beer could be served at lunch.

When a number of students returned from a cold Christmas trip, they were warmed up with brandy.