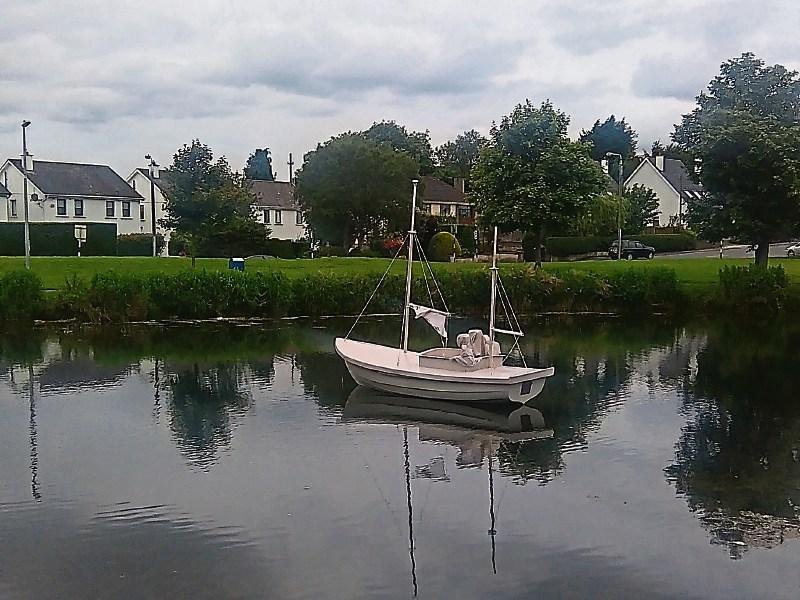 The replica of Ernest Shackleton's boat pictured in Naas

If you didn’t know any better you might assume that one of the lakes on the Ballymore side of Naas had been converted into a sort of Lough Derg over the last few weeks.

Alas no. The small, white-coloured water craft that floated in the body of water nearest Naas Hospital is a replica of a craft used by the explorer Ernest Shackleton.

One hundred years ago an epic survival story was unfolding in the frozen Antarctic Ocean. Shackleton’s ship Endurance had been crushed and sank.

The disaster left the crew of 28 to drift helplessly on the floating ice.

But Shackleton was no ordinary leader and he led the crew through overwhelming obstacles and ensured that in the midst of the inhospitable environment, they all got home safely.

A central piece of the survival story was the 800 mile (1,200 kilometres) voyage of the ship’s lifeboat James Caird across the wild South Atlantic Ocean to organise the rescue of the remaining crew members.

The James Caird carried a crew of six and three were Irish - Shackleton from Co Kildare, Kerryman Tom Crean and Tim McCarthy from Co Cork.

The boat which was on the Naas lakes is the James Caird 100 and is to two thirds scale. It commemorates one of the greatest feats of seafaring and the Irish connection.

“It also brings the achievements of Shackleton to life. There’s no direct connection with Naas. But the boat and the information provided on poles around the lakes brings part of the store of Shackleton to a wider audience. It’s been attracting attention including from the visiting Spanish students,” said local councillor Seamie Moore at the time of its installation.

The boat was last week moved to Goresbridge for a time, but may reappear in Naas before the year is out, say organisers.

For more information on the project see www.jamescaird100.org.