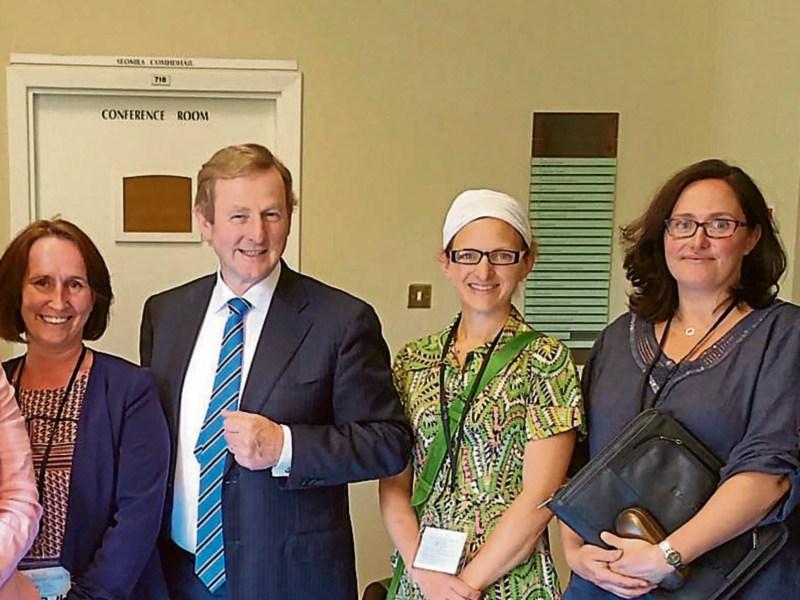 An Taoiseach Enda Kenny with Paula Carroll, Aideen McDonagh and Amy Mulvihill of SKET at Leinster House on Tuesday

The group campaigning for a second-level Educate Together school in south Kildare met the Education Minister and the Taoiseach at Leinster House last Tuesday, July 19.

The group presented to the Minister figures they compiled to challenge the Department of Education's analysis on demand for second level place in Kildare South.

SKET (South Kildare Educate Together) says the Department of Education has seriously underestimated the predicted demand for secondary school places in Kildare South.

Last November, the then Minister for Education Jan O'Sullivan opted to extend existing second level schools rather than authorise a new build for the county, in order to cope with predicted demand.

According to SKET, it presented Minister Richard Bruton with new data showing a significant second-level shortfall in the south of the county, and highlighted feeder school inaccuracies, admission policy restrictions and the inclusion of fee-paying schools in the Department's estimation of capacity.

The group said that the future housing growth in the south of the county is not being taken into consideration, and also voiced their concern regarding the disparity of dedicated ASD (autism) facilities in both primary and second level in Kildare.

“The recent CSO figures show a 5.6% population growth in Kildare since 2011, and confirms the growth of the county that we anticipated and are witnessing, in the shortage of second level places here,” said Jennifer Buttner of the campaign group.

According to Ms Buttner, Minister Bruton agreed to review the group's data and concerns with the Department of Education.

The politicians outlined to the Minister the volume of queries from parents their offices are receiving regarding second level places.

“Approved extensions for the Patricians in Newbridge, CPC Kilcullen and Athy Community College will help to alleviate demand in the coming years, but given the continued population growth in Kildare confirmed in the recent census figures, t he need for a new school must be considered,” said Deputy Heydon.

Following the meeting with Minister Bruton, the group also had a short briefing with the Taoiseach on the issue.

SKET is campaigning for a new second level school on the platforms of places plus diversity of choice which it says is not being offered to non-religious parents.

It now has more than 2,500 names registered as interested in a second level Educate Together school for the south of the county.

The Department of Education has said that Kildare South is subject to ongoing demographic review for the provision of additional secondary school places post-2018.

More information on SKET's campaign can be found at www.sket2ndlevel.org.