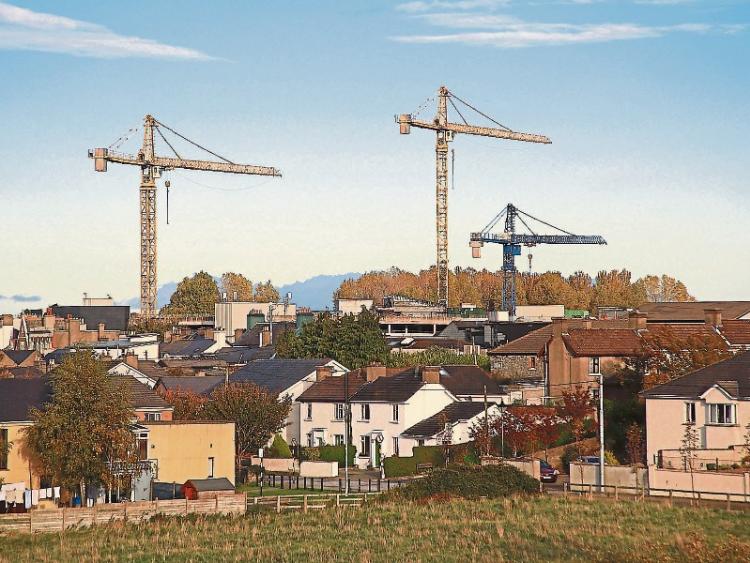 Cranes on the Naas skyline, looming over the derelict shopping centre site

The unopened Naas Shopping Centre is to be sold before the end of the year.

Although the National Asset Management Agency owns the loans secured on the multi million euro development, its has declined to comment on the likelihood of a sale.

However Fianna Fail TD James Lawless said the 16,000 square metre building, with 45 retail units, could have a new owner by the end of 2016.

The centre has the potential to provide almost 800 car park spaces.

“There is a definite indication from Nama that it will go for sale and I feel it will be sold by the end of the year and Kildare County Council (which once operated a car park on this site) is in agreement with the approach to sell,” Dep Lawless told the Leader.

He also said that he has spoken to potential purchasers.

Planning permission on the unfinished development is due to expire this month and Dep Lawless believes this could help secure a sale.

“Once the existing permission lapses it could expedite a sale because it means there could be greater flexibility about possible new uses such as offices, an employment or training centre or apartments. However apartments are unlikely and I think a shopping centre would be the best use,” he added.

He also said that seven additional property arbitrators are to be appointed.

As already reported in the Leader there is one outstanding arbitration case relating the the NSC and informal talks about this will resume in September.

Dep Lawless said he will lobby for a change in legislation to help ensure that any new buyer “can’t sit on the development” and leave it closed.

He plans to table a Private Member’s Bill in the Dail to put in a mechanism with the aim of ensuring there is a social and economic obligation which would help to promote employment opportunities after a sale.

A Private Member’s Bill is a proposal to change a law that can be launched by any TD.

Kildare County Council said the securing of a satisfactory conclusion to the development of the site has been a particular focus of KCC’s efforts over the last number of years.

“In this connection, the Council, on foot of arbitration procedures, recently successfully completed an agreement with one of two site owners relating to the provision of roads infrastructure to service the Town Centre site. The arbitration case relating to the second site owner remains to be heard by the Property Arbitrator, anticipated to take place in April 2017 due to the Property Arbitrators caseload.

“In parallel with these arbitration cases, KCC has also been involved in ongoing discussions with the owner of the site, and his agents, with a view to advancing development of the site as early as possible.”

A Nama spokesman told the Leader the agency “cannot comment on individual debtors”.

Meanwhile a former Naas councillor Mary Glennon has criticised councillors and council officials over the decision to sell the site.

“Instead of a towering wreck despoiling the town centre we would have enough parking to welcome people into the town and would have maintained the vibrant heart of Naas.”

But Cllr Seamie Moore said the delay was due to the amount of time which passed before the application to build the centre “came in”.

He said this project originated in 1998 and the concept of multi-storey parking was relatively new.

“We (the councillors) wanted more parking in the town of Naas.

“The centre would have given us at least 750 spaces whereas the existing car park had just 220 spaces.”

He also said that there was Government support for developers providing multi storey car parks then.

“It was a good decision at the time,” he said.