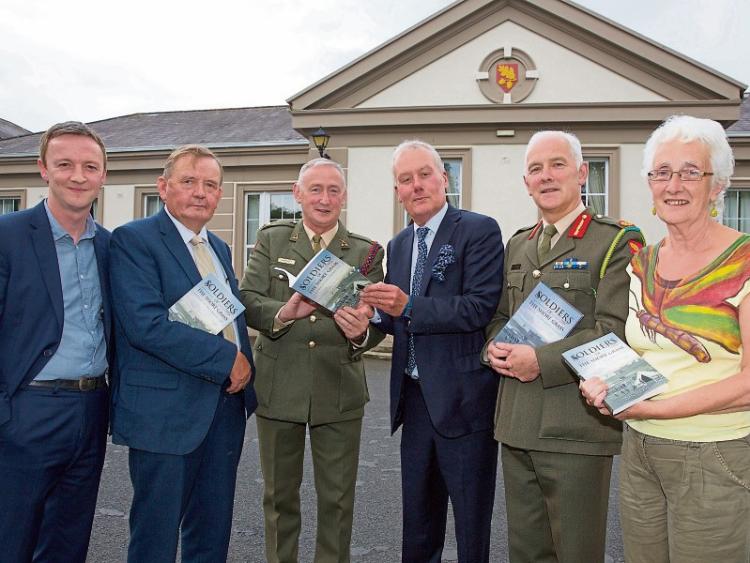 The first comprehensive history of Ireland’s most important military base was launched at the Curragh Camp recently.

Publishers, Newbridge based Merrion Press reported a huge crowd of well-wishers, army personnel, historians, friends and family gathered in the Ceannt Officers Mess for the launch of Soldiers of the Short Grass - A History of the Curragh Camp by Dan Harvey, a Lieutenant Colonel in the Irish Defence Forces.

The book was launched by author and columnist Kevin Myers who praised author Dan Harvey for his terrific scholarship stating, “he has so many arrows to his bow”.

Publisher Conor Graham, said this book adds to a suite of Kildare/military titles he has published, which also include In A Time of War: Kildare 1914-1918, and Kildare Barracks: From the Royal Field Artillery to the Irish Artillery Corps.

Spotted amongst the assembled guests were local author James Durney — whose latest book The 100 Kilo Case has been in the top 10 for several weeks, Mayor of Kildare Cllr Brendan Weld; Reggie Darling, Chair of the Curragh Historical Group; photographer Oliver McCrossan (many of whose photographs feature in the book), as well Brigadier General Joe Wilson

Author Dan Harvey who has since departed overseas was delighted with the evening and spoke about how “this first complete history of the Curragh Camp demonstrated how vitally and inextricably entangled the military heritage of the Curragh is with that of the Irish Defence Forces and indeed with the story of Ireland overall.” The book is available from all good bookshops including, Barker and Jones in Naas and Farrell & Nephew in Newbridge.